This week I wanted to address one of the topics often asked in private messages.  Enjoy it (Ps: Probably this approach won’t be welcome by the the ‘rational Judaism’ movement, but it’s a kosher approach among the Hassidim).

“And Aaron shall cast lots upon the two goats: one lot for HaShem, and the other lot for Azazel” (Lv 16:8).

The word “leazazel” which is repeated four times, only appears here in the whole Bible. In a literal interpretation it means “scapegoat” – from Ez (goat) and Azal (to go away). In a second level of interpretation it represents the Evil Inclination (ie. Satan) as the Judgment of Israel which goes away. There are many interpretations (the 70 faces of the Torah), but today we are going to explore the one that deals with fallen angels. 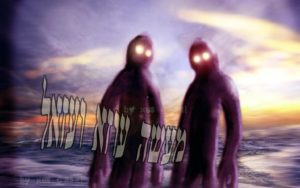 Rabbi Ishmael’s house interprets the word Azazel as a hint of two words: “Uzza and Azael”. So when reading the verse: “the goat chosen by lot for Azazel must be presented alive… to make atonement” (Lv 16:10), the school of Ishmael here interprets that “Azazel” is called so because: it’s an atonement for the deeds of Uzza and Azael (‘mekhaper al maasei Uza veAzael’; cf. Yoma 67b). These two עזא ועזאל are mentioned quite often in Midrashim (cf. Hanokh 6-8; Jubilees 5; Pirkei Eliezer 22; Yalkut Shimoni Gn 44, Zohar 1:9b…etc).

Let’s go by parts. First of all, although we can find hints in the Torah (in some cases, more than hints, clear allusions); this is a very ancient oral tradition, passed down from generation to generation. It’s something that belongs to the Oral traditions of our ancestors and in the past it wasn’t questioned. With the raise of Karaism and Maimonidean philosophy these stories were left behind, but they are completely part of our tradition and our Torah. This is how the ancient Midrash goes:

PART I: The first fall – Eden

The Blessed Holy one said about man: “Let him rule over the flying things of Heaven” (Gn 1:26). This includes angels as it’s written (Is 6:2): with two wings they fly (cf. Bahir 21). The ministering angels became jealous of him (Midrash haGadol, Gn c86). The angels replied to God: What is man that you should take note of him?… man is like vanity (Psal 144:3-4) (cf. Pirkei D’Rabbi Eliezer 13). Then Samael the wicked made a bond with all host on high against his Master (cf. Bahir 200).

The Serpent succeeded through being deceptive (Gn 3:1).

About the evil men is written: “They have sharpened their tongue like the Snake [ie. Nakhash]; viper’s venom is under their tongue” (Psal 140:4 [3]). This means that when the Snake seduced Eve, he poisoned her with slime (cf. Shabbat 145b-146a), and then she conceived and bore two sons. The first one, Kain was from the left side, the side of the Snake – the second one from the right side – the side of Adam [but was killed and then replaced by Seth]. From this we know the angel who was behind the Snake’s words is Samael (which means mighty-Poison, or Poison of God).

“Adam lived 130 years and engendered in his likeness, according to his image” (Gn 5:3).

From here you learn that Kain was not from his seed, nor in his likeness (Pirkei D’Rabbi Eliezer 22) – Kain was from the “other side”; the side of the Snake.

The origin of Uzza and Azael is rooted in Genesis 4:22, the end of Kain’s genealogy, which ends with a girl; Naamah, the sister of Tuval-Kain (cf. Rashi on Yoma 67b). Since this is the end of Kain’s genealogy, it is deduced that Tuval-Kain died on the flood.
There’s always a reason for names in the Bible. So, why is Naamah mentioned at all, and what does her name mean? Naamah means: lovely or pleasure [in feminine], and she’s mentioned as the sister of Tuval-Kain, the last person in Kain’s genealogy. The genealogy of Kain ends with a “lovely” woman, and when the story goes back to Kain’s generations, it talks about “beautiful women”, as it’s written:

“The sons of God saw the human daughters when they were beautifying themselves, and they took for themselves wives from whomever they chose” (Gn 6:2).

The expression: “Sons of God” is never used again in the whole Scripture; except in the book of Yov (said to be the oldest book of the Bible). The three times the book of Yov uses the expression “Sons of God” refers Celestial Beings (Yov 1:6, 2:1, 38:7). Four times in Scripture appears the word “Azazel” and four times in Scripture appears the expression “Sons of God”. The expression “daughters of haAdam” literally means “human daughters”.
The Midrash says the ministering angels questioned God for giving man such an authority. God replied: “If you were on earth like him, you would sin worse” (Zohar 1:25b). They didn’t believe and descended, leaving their own habitation – They are the ones who were disobedient when the patience of God was waiting in Noah’s days, as it’s written:

Naamah’s beauty seduced the sons of God, Uzza and Azael (Zohar 1:19b).

In the book of Enoch Uzza is called: Semyaza. Semyaza actually means: “the name  of Uzza” (Shem-Uzza).

God cast Uzza and Azael down from their holy place and they went astray after the women folk and seduced the world also (Zohar 3:208a).

“The Nefilim were on the earth in those days, and also afterward” (Gn 6:4)

. Those days refers to the days of Enosh and the children of Kain (cf. Rashi). Nefilim literally means: “fallen ones”. “They were meOlam (from Eternity – from the Shekhina)… they were 60; it is written: sixty mighty men encircling her (Song 3:7) (Zohar 1:37a). The Nefilim are called “”Anshei HaShem” (Gn 6:4), which can be translated as: “People of HaShem”, and also “MeOlam” (from eternity) meaning; their origin was from the Divine Presence (cf. Zohar I:37a).

“The sons of Kain resembled both the celestial angels above and the humans below” (Zohar 1:37a).

“When God saw that these fallen angels were seducing the world, he bound them in chains of iron to a mountain of darkness… Men who know where they are located seek them out, and they teach them enchantments and sorceries and divinations” (Zohar 3:208a).

Uzza means: “fierce” or “strength” and derives directly from Ez (goat) or Az (being strong). And Azael comes from the very same root, meaning: ‘the Mighty is Strong’. But according to Rabbi Ishmael it comes from Azal (to go away), because he never repented of his sin. The two together form: Azazel.
From this we learn that the primary atonement of Yom Kippur is atonement for sexual perversions – of which Uzza and Azael were guilty. That’s why in the Torah the commands of Yom Kippur are followed by the laws of sexual relations. Uzza and Azael represent human’s sexual lust in us.

“haNefilim hayu baAretz” (the Fallen ones were on Earth) (Gn 6:4). The last letters of this phrase, from left to right (the side of judgment), form the word: ‘Tzom’ – which means: ‘fasting’, alluding to the “fasting” of Yom Kippur – which is the atonement for sexual lust.

Rabbi Ishmael’s phrase: “the deeds of Uzza and Azael” in Gematria equal 613, alluding to the 613 commands of the Torah.