Let’s briefly review the relevant information we have been gathering to this point.

This week’s portion is called “The Lives of Sarah” (Hayei Sarah), after the first verse of the portion:

Ironical as it seems, the next verse says: “And Sarah died” (Gn 23:2). But she lives through her seed (cf. Taanit 5b).  The Torah in this portion talks about the legacy she left: It was Sarah who balanced Abraham’s excessive Mercy and protected the covenant of Isaac by sending Ishmael away. Now Sarah has passed away, and Isaac is safe and successfully carries the covenant promised by God, ready to bring into fulfilment the prophecy of a great offspring, and for this purpose he finds a merciful wife that also balances his excessive tendency to the side of justice, just like Sarah did with Abraham.

“Hayei Sarah (the lives of Sarah) were one hundred and twenty seven years; these were the years of Sarah’s life” (Gn 23:1).

Sarah’s number of years in this portion is written in a very peculiar manner. Normally the word ‘year’ appears only once, at the end of the number. Let’s see a few examples:

There are also cases in which the word ‘year’ appears twice, separating the hundreds from the tens and units – this is especially seen in the genealogies from Adam to the generation of the Babel Tower (Gn 1 to 11).

But in Sarah’s case we got the word “Year” three times! The hundreds, the tens and the units are all separated by the word “Year”; so reading it literally, it’s written:

“And were the lives of Sarah one hundred years and twenty years and seven years” (Gn 23:1).

In harmony with what it’s written: ‘the Lives of Sarah’ and not ‘the Life of Sarah’; as if Sarah lived three times. Of course these three form a compound and a single number: 127. The reason the number is separated in three periods is because “Each one of the three parts was equivalent to the other two” (cf. Rashi).

Why was not Abraham with her? Where did he come from? The Previous chapter says he was in Be’er-sheba, immediately after binding Isaac to offer him in Sacrifice (Gn 22:19-20). The Midrash explains that Sarah died because of the sorrow of thinking that Isaac was probably dead (cf. Bereshit Rabbah 58:5).

This is in fact the Drash (homiletical interpretation) based on Pshat (the intended meaning of the text). But now it’s time to dig deeper.

This becomes relevant now, because it’s deduced from the text that Sarah died at the age of 127, after the binding of Isaac, when he was 37 years old.

In this week’s reading, the first word: “Vayihyu” (“And were” [the lives of Sarah…etc]) has the numerical value of 37. By chances of fate this word is symmetric; it reads the same backwards. This closed symmetry is telling us that our line of thought is in its climax.

The Zohar thus reads our first verse as hinting that “Vayihyu = 37 years of Isaac – were the lives of Sarah” (cf. Zohar I:123a). The Zohar is basically saying that Sarah’s life really began [to be enjoyed] only after Isaac was born, for it is said: “the lives of Sarah”. Two lives then: her own and the one of her son.

This is also hinted in the permutation of Isaac’s name. Isaac (Yitzhak) יצחק can be permuted into ‘Life’ (Khai) חי and the numbers 90  צ and 100  ק. Because he was born when Sarah was 90 and when Abraham was 100.

According to what it’s written: “He makes the barren woman to dwell in her house as a happy mother of children” (Ps 113:9); and this is a reference to Sarah, because the title: “Hayei Sarah” (the lives of Sarah) equals 533; which is 13 times the word: “Mother” in Hebrew (13 being the value of “Love”).

INTRODUCTION TO THE SEFIROT

We have seen that Sarah’s age, 127, is divided into three sets of numbers. Get ready because we are gonna enter into the realm of Kabbalah, and it’s going to get complicated.

The number 127 reflects three descending aspects of God’s Light, or Patzufim (faces/personifications): ‘HaShem, the God, the Holy’ – Havaya haElokim haKadosh – (1S 6:20); this title of three Names equals 127 in Mispar Siduri. And this has to do with the arrangement of a concept known as “the Sefirot”.

What are the Sefirot?

The 10 Sefirot are alluded to in virtually every portion of the Bible [and this portion is not an exception]; but the clearest ones reveal that these were used to create the reality we perceive [and therefore everything we know exists within them] and are also used to rectify ourselves and to repair (or destroy) the world, bringing it closer to God’s will; in fact they are meant to bring existence into Perfection. For instance: 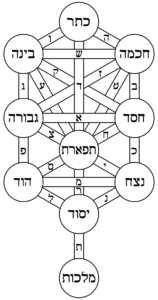 Since the Sefirot emerge from God’s Primordial Will (known as the ‘Infinite Light’), they follow a logical order.

Allow me for a second to be over-simplistic and explain this in a nutshell.

The upper one (Crown) is about Will, and the lowest one (Kingdom) is about Action, and the ones in between represent intellectual and emotive transmitters that bring unification [or not] between the two. It can be compared to a King who has the will to reign peacefully over a Country and he sends this message to its citizens; depending on how the citizens react towards the messengers, the king will be prone to act with mercy or with strength, but eventually he will fulfil his will.

A Perfect correction in the Sefirot will allow the King to reign over that city with the full joy of both, the king and the citizens.

This must not be understood only as a global event, it also refers to each person’s path to correct their Soul. Take for instance the Decalogue, which is meant to correct not only the community, but also the soul of each individual.

• The function of each one of the ten sefirot is governed by the upper 10 sefirot; this means that each one of the ten sefirot can be divided into another 10 sefirot (Klakh Pitkhei Hokhma 22:1). 10 within 10. The complete correction of all the sefirot, therefore, leads us to ‘ten times ten’ = 100 = Yofi (Beauty). Incidentally Yofi is the acronym for ‘Yod Peamim Yod’ – Ten times Ten.

This majestic correction is what we expect to achieve within the Messianic era: the Beauty (100 = 10 x 10) of the Crown (cf. Rav Yitzhak Ginsbourgh).

If you have ears to hear, you will find this concealed in the following verse:

“Bringing the Queen Vashti [a name that means ‘beauty’ in Persian] before the King, inside the Crown [keter] of the Kingdom [Malkhut], to display… her beauty [Yafa]” (Esth 1:11).

In simple words this has to do with bringing the world under the kingship of God’s will, by correcting all the aspects of the sefirot within each person’s soul.

Globally, this is an aspect that a Jewish King is supposed to accomplish, as it’s written:

An allusion to the king Messiah, as it’s also written:

In this secret of King Messiah, the word for ‘Joy’ – Gil – is related to ‘Galah’ גלה; verb that refers to uncover something, to reveal, as in “Gal Einai” – uncover my eyes [that I may see wonders in your Torah] (Ps 119:18) – that is: to see beneath the physical garments in which the Torah clothed itself when was brought to our world (cf. Zohar III:152a).

In this secret the Hassidim explain that the Torah of Messiah comes from highest part of the highest Sefirah (Keter of Keter) (10 x10 = 100), which is called: The Soul of the Soul of Torah, that in the future we are destined to gaze upon (cf. Zohar III, 110a, 152a cf. Vayikra Rabbah 13:3).

And interestingly, the word ‘Gil’ (Joy) also means ‘Age’. The ‘age’ גיל of Abraham and Sarah is a secret to be uncovered להתגלות because is relevant to their joy גיל for Isaac, as it’s written: “Abraham was 100 years old when his son was born”; “And were [= 37] the lives of Sarah one hundred years…” (Gn 23:1).

In the three sets of Sarah’s life, as mentioned above, we find therefore an allusion to the Sefirot.

■  The number 100 connotes wholeness; equalling Yofi (10 times 10) representing the Sefirah of the Crown (Keter), which “is the totality of everything else” and hence encompassing all the Sefirot (cf. Klakh Pitkhei Hokhma 15:1).

■  Number 20 refers to the two intellectual Sefirot (Wisdom and Understanding) with their 10 respective Sefirot each, that when combined reveal the Will of the Crown. In Hebrew the word for twenty, “Eshrim” equals: 620; which is the value of Keter (Crown).  It’s therefore written: “Observe [the statutes within the Torah] for this is your Wisdom and your Understanding” (Dt 4:6).

■ Number 7 refers to the 7 emotive Sefirot that are the product of coupling Wisdom with Understanding; as it’s written: ‘Wisdom Built its house; it has hewn out its seven pillars’ (Prov 9:1). Here the word ‘built’ (bantah) comes from banah (to build) which is the etymological root of Binah (Understanding).

The three sets of Numbers therefore reveal the sefirot and the levels of perfection in Sarah’s soul. Through this perfection, she was able to perceive that Isaac represents the Messiah, based on the verses mentioned above (cf. Rav Yitzhak Ginsbourgh).

Abraham perceived Isaac as the Messiah of his generation, as it’s written: “Abraham was 100 years old” (100 = Yofi = 10 times 10 = Perfection of the Sefirot); while Sarah reached this perception when Isaac was 10 years old – the age a boy is ready to study Mishna (cf. Pirkei Avot 5:25). ‘Mishna’ (doctrine) has the letters of ‘Neshama’ (Soul); in the secret of: “HaShem God… breathed into his nostrils Nishmat Hayim” (Gn 2:7) – “Soul of Life” or “Inspiration of Life” or in plural “Inspiration of Lives” – which is a reference to Messiah’s Soul (as mentioned in Parashat Bereshit).

Thus our sages taught “the Torah one learns in this world is Hevel before the Torah of Messiah”. It doesn’t mean the Torah we have today is useless or that Torah itself will disappear – that would be a misinterpretation – “Torah is eternal” (yad haKhazakah, Melakhim 11:3); what is meant with the statement is that the levels of Torah we study today are like a breeze that gives [spiritual] Life into the Body, and then goes out because it has served its purpose, which is to bring us to the level of the Torah of Messiah, where we will be able to experience the Divine (as it has been explained in detail in parashat Noah; cf. Eiruvei Tekhumin 5:22).

All our effort in bringing people closer to God, and in correcting our soul and our perception are steps to bring this world into perfection. These are steps in bringing the Messianic era. Studying the Torah of Truth with the intention to find God and godliness can give a person a taste of the Torah of Messiah (cf. Likutei Moharan I, 61). Our patriarchs, Abraham and Sarah, worked hard in rectifying their soul and in bringing people under the wings of the Divine Presence. By doing so, they were rewarded with a sight of Messiah, represented in their son Isaac, and now every new believer, from whatever nation he comes, is said to be grafted in Abraham.