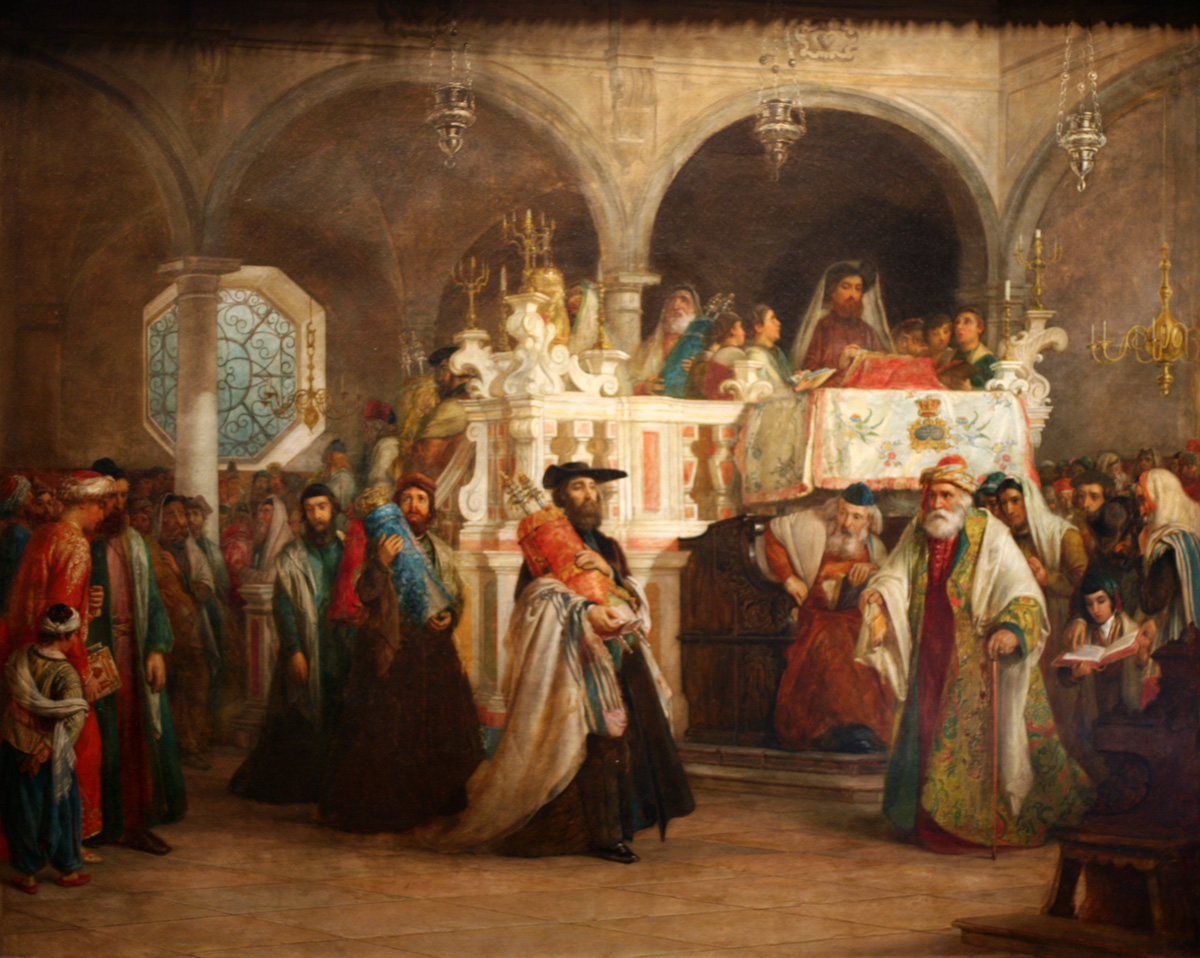 This continues the previous note. Contextually it made no sense to talk about this there, since it was more focused on Hanukkah. But since the previous note explored a few of Messiah’s aspects, it is worthy to go deeper in one of the most precious aspects shown in the Parasha.

Another aspect of Messiah ben Yosef is to act as a Light to reveal the hidden.

Thus Yosef is called: Tzafnat-Paneakh – ‘he to whom mysteries are revealed’ (cf. Gn 41:45 Onkelos ). As stated:

“And his perception/smell (והריחו – vaHarikho) will be in fear of HaShem, and he will not judge after the sight of his eyes… with the breath of his lips he will slay the wicked”(Is 11:3).

On the aspect of Messiah’s nose it is stated: “his breath will be in the fear of HaShem” (Is 11:2). The term “in the fear” – bYirat – ביראת, is the Gematria of 613 (תריג). So Messiah’s breath is the Torah and its 613 commandments (cf. Tikunei Zohar 5b). [Notice the first thing that God told Yehoshua son of Nun (son of Yosef, soul of Messiah ben Yosef) is: “Be very careful to obey All the Torah that my servant Moses gave to you… meditate on it day and night” (Josh 1:7).]

He will be able to breathe into others, filling them with a feeling of awe for God (cf. Likutei Moharan I, 8:2), he will be able to rebuke everyone properly, drawing them closer to God, bringing them to repentance; teaching them to obey the Torah, telling them that whoever breaks one single command of the Torah will be guilty, as stated: “I will search Jerusalem with candles” (Zeph 1:12) and “the Earth will be filled with the knowledge of the glory of HaShem” (Hab 2:14) and also: “many peoples will go and say, come, let us go up to the mount of Hashem… and he will teach us… for out of Zion will come the Torah” (Is 2:3). In the likeness of “Gentiles will come to your Light” (Is 60:3). So this is why one of Messiah’s names is: “Wonderful Advisor” – Pele Yoetz (Is 9:6).  Messiah therefore, brings correction (tikkun) to the material world, as stated: “Your King comes riding a donkey”. The word “Donkey” – Hamor, has the same letters and value with the word for ‘matter’ or materiality: ‘Homer’.

As Messiah has the Spirit of God (Gn 41:38), and the Spirit of God hovers over the face of the waters (Gn 1:2), ‘He to whom mysteries are revealed’ – ‘Tzafnat-Paneakh’ also means that he will bring a new level of understanding the Torah. He will bring the: “Torah of Messiah”. Because the Wisdom of the Torah is compared to water, as Moses stated: “May my teaching drop like the rain” (Dt 32:2) and also: “all who are thirsty, come for water” (Is 55:1; cf.  Baba Kama 82a), and Messiah brings a new revelation as stated: “A [new] Torah will come forth from me” (Is 51:4; cf. Vayikra Rabbah 13:3), and also: “God will reveal newness to the world” (Jer 31:21). The Torah of Messiah comes from the higher level of revelation possible, from Atika Kadisha as stated in the verse: ‘with the clouds of Heaven came one like a son of man and he approached Atik Yomaya’ (Dn 7:13). Messiah is to reveal all things. This Torah of Messiah not only reveals mysteries, but also brings people to reach unity with their Creator, as stated: “I will place my Torah within them and inscribe it upon their hearts” (Jer 31:32).

THE NEED FOR BEING UNRECOGNIZED

“Yosef recalled the dreams that he had dreamed about them” (Gn 42:9).

Nahmanides notices that after this phrase, Yosef instead of saying: “I am your brother”, he still hides himself from them and says: “you are spies!”  Why?

When his brothers bowed to him Yosef recalled his dreams, and then he realized none of them were fulfilled yet; because in the first dream all of his brothers bow to him and in the second dream the sun (Yakov) and the moon join. But here the first dream could not be fulfilled because Benyamin was not among them. So he devised a scheme so that the two dreams would be fulfilled, because one is obligated to do everything in his hand to bring about the fulfilment of a prophecy (cf. Pirush Ramban on Gn 42:9).

Previously the Ramban had noticed that the “Moon” in the dream could not refer to Yosef’s mother, because she had already died, even before the dream.

The Moon represents the whole community of Israel while the Sun represents the righteous ones. This is exemplified in the two sons of Tamar: “Peretz and Zerakh” (Gn 38:29-30). Peretz (breaking through) is the aspect of the Moon which experiences periods of brokenness, and Zerakh (shining) refers to the Sun, which always shines in the same manner. But Peretz (the moon) was born before Zerakh (the sun) (cf. Bahir 197). Because Peretz (the ancestor of King David) goes through a [genealogical] process before totally shining like the sun.

This is to teach us that Messiah ben Yosef is the cause of the footsteps of Messiah that lead to Redemption, and that those footsteps are necessary periods of concealment and suffering for the perfection of the community of Israel.

“Your God and the God of your fathers has put a hidden treasure in your sacks” (Gn 43:23).

If you follow the narrative, apparently Yosef seems to be lying. He commanded by himself to return their money (Gn 42:25). Yosef gives his brothers the excuse that probably the overseer forgot to get the money of the payment from the sacks before filling them with grain, and that’s why the money was buried inside the grain, but whatever the reason was, it was Divine Providence (cf. Pirush Ramban on Gn 43:23).

This is an aspect of Messiah ben Yosef, who is considered a liar, as the verse –  which we have already studied in depth– says: “Sheker haKhen” (grace is deceitful).

The words of Yosef – who hides himself under gentile garments – are like a naked truth; they cannot be received as Truth because they are bereft of proper garments. This is an aspect of the Torah of Messiah, which is too high for our generation that appears to be falsehood.

However, Yosef was not lying. Because in deed the brothers had already paid their grain, and thus the words: “your payment had reached me” is truth. Likewise, Yosef was working to fulfil a prophecy, and everything went according to Divine Providence, so the words: “Your God and the God of your fathers has put a hidden treasure in your sacks” is Truth.

Equally, when Yosef accused them of being spies and put them in custody for three days (cf. Gn 42:17), he was correcting the sin in the city of Shekhem, when his brothers commanded the gentiles to circumcise (meaning: consecrating Yesod– which is Yosef) and in the third day they infiltrated in their city and killed them all (cf. Gn 34:25). Measure for measure, Yosef confined them all. But for Yosef the Covenant (circumcision, Yesod) was holy – thus the words: ‘I fear God’ and instead of killing them on the third day, he let them go (cf. Zohar Miketz), but kept Shimon in custody – because it was he who threw him to the pit (cf. Bereshit Rabbah 84:16). These words became truth later, when Moses sent spies of each tribe to Canaan, so they were spies in truth (cf. Meloh haOmer).

Additionally, Yosef’s plot to bring Binyamin served to see in his brothers their level of repentance for having sold him in the past.

One of the greatest sins is to sell and give away a fellow Jew to the gentiles, more so if he’s righteous like Yosef.

“For three transgression of Israel, yet for four I will not forgive, because they sold the righteous for silver and the needy for a pair of shoes” (Amos 2:6).

Selling a fellow Jew is punished by the Sanhedrin with death, this sin is called: “the selling of Yosef” (cf. the 10 martyrs, Yom Kippur Agaddah).

The reason that Judah offered himself for the sake of Binyamin reflected the repentance of his brothers, that’s the reason that of the 12 spies, only Joshua (from Yosef) and Kalev (from Judah) gave a good report. So every deed of Yosef, even his harsh judgment towards his brothers came from the side of Holiness and kindness, and was Truth; just as the Torah of Messiah is Truth.

This unification of Judah with Yosef has been prophesied for the end of days: “Ephraim will not envy Yehuda and Yehuda will not fight Ephraim” (Is 11:13). “And I will make them into one nation and one king will rule over them” (Ez 37:22)! That is: the unification of Messiah ben David with Messiah ben Yosef.