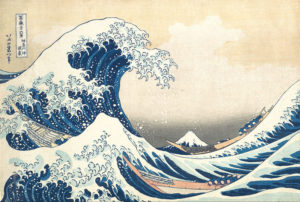 [From the teachings of Rav. Ginsbourgh (Gal Einai Institute) and Ariel Cohen Alloro] 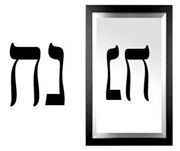 Noah and Hen (grace) are compromised of the same two Hebrew letters (Nun and Het). ‘Hen’ in Hebrew is one of 8 synonyms for beauty. ‘Hen’ corresponds to “Charm”. Charm is that aspect of beauty which expresses itself through the aesthetic of graceful symmetry; two inverse elements reflecting each other (נח – חן). As Noah was reflected in the Eyes of HaShem, he was found as Hen. In the pupil of the eye, the image one sees appears inverted, then the brain puts it right (cf. David Kimchi, Sefer haShorashim s.v. Ish). That is how in God’s eyes ‘Noah’ becomes ‘Hen’. The opposite happened to Er – ער, the firstborn of Judah, since his letters reversed and he was found as Ra –  רע (evil) in the eyes of HaShem (Gn 38:7; cf. Zohar 1:58b). What made the difference with Noah? Scripture explains:

“Account of Noah Noah was a Righteous man” (Genesis 6:9).

The word Noah is repeated twice in this verse, thus alluding to the upper grace (Hen Elyon) and the lower grace (Hen Tahton). Noah below reflected God above; which is the mystery found in the words:

“Elokim” is the Divine Immanence (Shekhinah). So he became the foundation of the world (quite literally), as Solomon wrote:

“The Righteous one is the foundation of the World – Tsadik Yesod Olam” (Proverbs 10:25).

The Righteous one is the pillar for which the world stands. If there were not righteous persons on earth reflecting God, the world would not stand;

Remember how Abraham negotiated with the Holy one to save Sodom? Why [Prov 10:25]: “The Righteous one” in singular? Certainly Sodom would have been saved if there were more than 10 righteous in it, but it wasn’t saved by the merits of only one righteous (Lot). But on Noah’s generation, human existence was preserved only because of him, as the verse states:

“Noah was a righteous man, perfect among the people” (Gn 6:9)

Noah was the 10th generation of mankind. 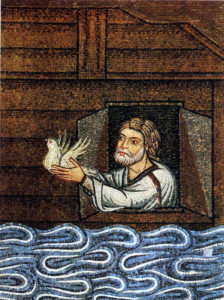 We read that Noah was six hundred years old when he entered the Ark (Gn 7:6-7). And we believe that Scripture doesn’t record irrelevant or superfluous words. So if Torah says that Noah was 600 years old, it must be important. Now notice that Solomon hints us the two words: ‘Noah’ and ‘600’ in the verse:

The numerical value of Sheker = (שקר)   600  (שק”ר). And ‘Hen’ is “Noah” in symmetry, as stated above. So under this Light we see that “Grace is Deceitful” hints us to “the 600 of Noah”. If we follow the logic of our narrative, Noah was seen as a liar to his own generation. The Midrash says that Noah built the Ark so that his generation will have 120 years to repent and turn to God. So during the 120 years in which Noah was building the Ark, the people of his generation didn’t believe him. This is the secret found in “Sheker haHen”; Noah is a liar. Noah was Sheker, שקר (deceitful = 600) when the floodwaters came on earth.

During the generation of Noah “the sons of God saw that the daughters of men were fair” (Gn 6:2). People were occupied in achieving the beauty of this world for themselves, unaware that it was going to disappear. This is “Hevel haYofi”; beauty is vain. Now, applying the mystical aspect to this portion our sages interpret here:

“The Torah which man learns in this world, will be vanity (hevel) before the Torah of Messiah” (cf. Kohelet Rabbah 11:8).

Why there’s this connection between Noah and Messiah? Because the Prophet Isaiah alludes to both in the verse:

“Who has believed our message? And to whom the arm of the Lord been revealed? He grew up before him like a tender shoot, like a root out of dry ground” (Is 53:1-2).

Noah = Hen. ‘Hen’ is the acronym for: Hokhma Nistarah (hidden wisdom). And there’s no deeper hidden Wisdom than the Torah of Messiah. In the secret of Noah appearing backwards in God’s eyes, as explained above, our sages said: “turn it over and turn it over for all is in it” (Avot: 5:22). By turning once and again Noah, ie. the Torah, one finds its most inner dimension (the Torah of Messiah).

Of this our sages say:

In the time of Noah, when the flood came, no one needed to say that Noah was right. It was obvious for all of them, they were living the words of Noah. So too in the time of Messiah, none will need to teach their neighbour saying: Know God, “because they will all know Me” (Jer 31:34).

So Noah is the paradigm of Messiah’s salvation, of how the earth receives rest through the merits of the Righteous one, the Messiah.

Messiah ben Yosef is to be rejected, just as Noah was rejected. “Sheker haHen” – He is considered a liar by his generation.

“Messiah ben Yosef recognizes his brothers, but they don’t recognize him. This is an act of the Satan, who conceals Messiah ben Yosef’s attributes…if Israel recognized Yosef… we would have been completely redeemed already” (cf. Vilna Gaon; Kol haTor 2:39). 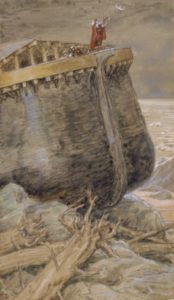