“The sons of Israel traveled… and the mixed multitude went up also with them” (Ex 12:38).

Contextually, the “Mixed Multitude” (Erev Rav) is the Egyptians who converted in the time of Yosef and Moses and joined Israel, thus becoming ‘the people’ (cf. Zohar II: 191a) [This is a secret in the verse: ‘Pharaoh sent the people away’ (Ex 13:17)]. However, their soul didn’t convert totally to the ethics and morals of the One True God. Their heart was still in the things of Egypt; therefore the Torah differentiates between them and the sons of Israel, denoting a lack of integration.

“Erev” means “intermixed”; it’s the Hebrew word for ‘evening’; when the day is intermixed with the night. A verse states:

The Day being intermixed with the night is a picture of disorder. But disorder precedes order and discernment (bikoret); it’s a necessary step, as it’s written: “there was evening (Erev) and there was morning (boker), one day” (Gn 1:5).

In other words: the Erev Rav is a mix of “Good and Evil”, just like the tree of knowledge which Adam was forbidden to eat from. The soul of the Erev Rav is rooted in this tree bringing death to the nation of Israel (cf. Zohar I:26a; Tikkunei Zohar 66).

“Rav” means literally: ‘many’; and it’s a hint for the “Leaders of the Sons” (Rosh banim = Acronym ‘Rav’); in fact the word “Rav” is used to express a leader of Israel (similar to the English: ‘Rev’. ie. Reverend) (cf. Likutim haGra). What does it mean? That when the Holy nation of Israel commits a terrible mistake in front of God, we will find the “Erev Rav” instigated it. Therefore it’s written:

There’s a specific verse that attributes the fault of Israel’s lack of faith to the Erev Rav.

“And the Mixed Multitude among them fell in a lust, and the sons of Israel also wept on their part” (Nm 11:4).

It’s of them that it’s written:

“Your leaders are rebellious, and companions of thieves; every one loves bribes, and follows after rewards; they judge not the orphans neither does the cause of the widow reach them” (Is 1:23) (cf. Tikkunei Zohar 21). 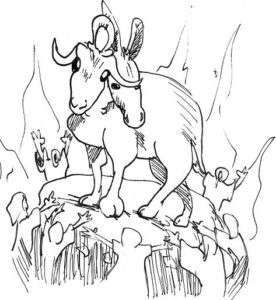 “The Golden Calf (Egel haZahav) was made by the Erev Rav and they are the ones who said: These are your gods Israel. [Notice it says] ‘These are your gods’ and not ‘these are our gods’. And Aaron, his sons and the 70 elders who were left in charge, sinned by not rebuking them” (cf. Sefer Etz ha Daat Tov Shemini)

How many people sinned worshiping the Golden Calf?  If the Golden Calf represents the fruit of the Erev Rav (the tree of Good and evil which brings death), and the Torah states that Three thousand people died (Ex 32:28), then there were three thousand people worshiping the idol. And the rest of the people allowed it to happen (which is why judgment went upon them). In other words: If you are not part of the solution, you are contributing to the problem. The worshipers fell in Avodah Zara (false worship) and the rest of the nation failed to obey one of the laws of Noah: To establish Justice in your place, and by consequence many of them joined them in their heart (which is why they needed to be purified).

Aaron made them use the gold taken from Egypt which their wives and children were wearing, and tried to buy some time until Moses would hopefully come back. Their wives were not willing to give away the rings, that’s why it’s written: “the people ripped out the earrings” (32:3); when the calf was finished he said: “Tomorrow [and not today] will be the celebration to HaShem” (Ex 32:5). Aaron however sinned by not rebuking them, therefore it’s written: “HaShem was very angry with Aaron to have destroyed him, but I [Moses] prayed for Aaron” (Dt 9:20).

Did the calf appear by itself magically out of the fire? While we tend to believe that Aaron was making an excuse, we are commanded to judge favourably, so maybe he was telling the truth!! Maybe, In fact, the Calf was created through magic; ie. Egyptian enchantments performed by the Erev Rav.

Is it a coincidence that Oral Tradition (both Jewish and Christian) attributes the making of the Golden Calf, not to Aaron, but to the magicians: Yanes and Yamberes? (cf.Sefer haYashar, Onkelos, Zohar; cf. 2Ti 3:8). When God performed miracles in Egypt the Egyptian magicians tried to emulate Him. When they saw the wonders of God, they decided to join Israel in the Exodus. Therefore it’s written: “he took the Calf which they had made” (Ex 32:20); it says “which they had made” and not “which Aaron had made”.

The word “Graving Tool” is “Kheret”; a metal instrument used for inscribing, as in the verse: “take for you a great roll and write in it with a man’s Kheret [writing tool]” (Is 8:1). Of the Decalogue is written:

Why does Isaiah (8:1) call it “Kheret Enosh” (the style of a common man)? What’s so special about Enosh? Because his time people started idolatry (Gn 4:26). The idea here is that the Erev Rav wanted to understand God their own way; making him a physical face. Notice Aaron calls the worship of the Calf: ‘feast to HaShem’. Let us “rewrite” the rules, they would say. As a retribution, both, the Tablets and the Calf were broken into pieces.

The same word –חרט – pronounced “Kharit” instead of “Kheret” means “a bag” (cf. Is 3:22). The Zohar interprets it to be a magical ritual. “Aaron received [their gold] at their hand, vaYatzar oto baKheret”; meaning, he took the gold and bundled it (Tzarar oto) in a bag (Kharit), because that’s the procedure for this kind of magic (see also Targum Yonathan which renders it as: “and bound it up in a linen cloth”).

It would not be surprising if in fact the Golden Calf was able to move by itself (like a golem) and the magicians made it to be the body of a Spirit, because it’s hinted in the verse:

“They changed their glory into the building of an ox that eats grass” (Psal 106:20)

“Samael entered into it and was lowing to mislead Israel as it’s said (Is 1:3): ‘the Ox knows his owner… but Israel doesn’t [his owner was Satan; as he also was the owner of the Snake that could speak and misled Adam]” (Pirkei Eliezer 45).

The Attribute of Judgment

“Now, if you would but forgive their sin! If not, please erase me from Your Book that you have written” (Ex 32:32).

After Israel’s sin with the Golden Calf, God decreed that his Divine Presence would not go among them and that their entrance to Canaan would be by the attribute of Judgment. That’s the meaning of “They changed their glory” which is the Shekhina, as in the verse: “the Glory departed from Israel” (1S 4:21).

‘Moshe Rabbeinu’ went up to intercede for his people, willing to share their fate. This was done with gratuitous love (Ahavat Hinam), showing once again the attribute of Mercy (Rahamim) that Moses embodied as mediator between the people and God (ie. Tiferet), in fact, before this, God had shown the intention to kill the whole nation and make from Moses a new one, but Moses interceded for them.  By this, God accepted to bring the Divine Presence among them once again, and to remake the tablets with the Decalogue.

The opposite of this is what our sages taught; that the Second Temple was destroyed on account of baseless hatred (Sinat Hinam) (cf. Yoma 9b). Moses taught us that the proper correction for this sin is unconditional love, and until this is not done, the Messianic era will delay, or worse, it will come by the attribute of Judgment (Middat haDin).

The Attribute of Judgment belongs to the wars of Messiah ben Yosef, whose job is to bring the people of Israel from “Judgment” to “Compassion” (Rahamim), so that the Shekhina will come back from her exile.

By this we learn that Messiah ben Yosef comes to oppose the forces of the Erev Rav, so that they won’t take control over Israel and end up in a complete spiritual death. He will also fight the “idol that moves” which in the Midrash is called “Armilus”; this is, the spiritual force that leads the Erev Rav.

Therefore, when Yehoshua son of Nun heard the tumult of the Erev Rav he heard it according to the attribute of Judgment, as “A Sound of War” (Ex 32:17).

That’s the meaning of the verse: “I will send an angel before you and I will drive out the Cananite… etc, but I will not go in the midst of you” (Ex 33:2-3). “The Angel” mentioned here is the angel of Messiah ben Yosef, the attribute of Judgment; “Metatron the Lad” (cf. Sanh 38b); who is embodied in the “Righteous one”, that is: Yosef = Yehoshua.

Meaning in that generation he embodied the Righteous one, Messiah ben Yosef; who fights the wars of HaShem and brings people to the Holy Land.

During Moses’ third and last 40-day sojourn in the Upper worlds, when he received the second set of tablets his body absorbed the spirituality of heaven; he had become like an angel, immune to hunger. So, after receiving the second tablets—when he had not only been a guest in heaven, he himself had become heavenly—his physical body reflected this unearthly light (cf. Likutei Sichot vol. 36, p. 179). His skin (Ohr) had become light (Ohr). In Hebrew, Skin and Light are homophonic words; they are pronounced the same, but there’s a difference in one letter.

Moses had achieved a level where Adam had previously fallen. Because Adam was created in the level of the Celestial Light of Eden, “a little lower than angels” or “a little lower than God” (Psal 8:6 [5]). But of Adam is written: “the Lord God made for Adam and his woman coverings of Skin” (Gn 3:21). The etymological root for “Skin” (ohr) is “to hide”, “to conceal”. The phrase: “covering of skin” in Hebrew “Ketonet Ohr” sounds as “concealment of Light” (cf. Bereshit Rabbah 20:12); which implies that originally Adam emanated and was covered with Light (cf. Zohar I:36b); otherwise he would not be in Eden (cf. Zohar Shemot 2:229b).

The difference between Light (Ohr) and Skin (Ohr) is that one is written with Alef and the other with Ayin (and interestingly, these two letters are quite often interchangeable:  ‘in the school of Rav Eliezer Alef were read as Ayin and Ayin as Alef’ [Berakhot 32a]). Light is written with an Alef (the Divine letter of ‘Elokim, Alufo shel Olam’ – God, the sovereign of the universe).

But when Light is written with Ayin it gives the word “Skin.” Man’s purpose on earth is to transform the physical covering in which his soul has been encased into the “Light” of God’s word (cf. Sefat Emet). Therefore, the word “Skin” (Ohr) can also be pronounced as “Ur” which means ‘to awaken’.

Moses awakened the Celestial Light of Torah within him, transforming his material Skin into Light, for it’s written:

The name “Moshe Rabbeinu” equals in Gematria to the 613 commandments of the Torah.

Therefore it’s written of him:

The Baal Shem Tov also taught that we all are meant to be a “living Torah” and transform our physical materiality into Godliness by making ours the Word of God, and this is something we will certainly experience in the World to Come.