13 Petals > Parshah > Parashat Lekh Lekha – The Blessing and the Plants 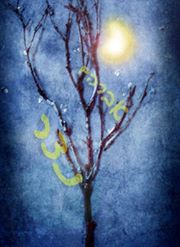 “And Terah took Avram… and Lot… and Sarai… and they went forth with them from Ur Casdim to go to the land of Canaan” (Gn 11:31).

Kasdim is the Hebrew name for the Chaldeans. What is Ur Kasdim? It can also be read as: “Ohr K’Shedim” – A Light that is like the one of the demons; in the secret of the verses: “They sacrificed to demons [shedim] that are not God” (Dt 32:17) and “the light [ohr] of the wicked is taken from them” (Yov 38:15).

Right after this it’s written:

So they left before receiving the explicit instruction form God. The Zohar (Lekh Lekha) interprets here that Terah left Ur and went towards Canaan with these people, because they desired to go there. God’s command to go to Canaan was given only after they showed a desire to depart from the sinful life of the Chaldeans. We learn from this that “whoever seeks to be purified will be assisted from Above” (cf. Shabbat 104a). In the likeness of the Midrash:

“Make a small opening [of repentance] like the opening of a needle, and I will open for you entrances through which caravans can pass” (Shir haShirim Rabbah 5:2)

In few words, it is God who assists us and who leads us to our spiritual goal, but we must do our part, even if it seems as a gigantic step for us, but in truth everything we do for Heaven are little steps, and we must take these steps.

Terah was, in the fashion of the Chaldeans, an idolater (Josh 24:2). In fact the Midrash says he was an idol-maker (cf. Eliyahu Zuta 36, Eliyahu Rabbah 6, Midrash Gadol Bereshit 11:28). The Zohar says he left Ur out of fear of being killed, and not necessarily because he repented. But Avram was different; he believed in God and didn’t recognize the power of idols, which in many occasions broke into pieces to ridicule the Chaldeans beliefs (cf. Nedarim 32a; cf. Mishne Torah: Avodah Zara 1:3).  They had already departed from their birth-land, and yet God tells Avram to leave his land and his father’s house. Normally a man leaves first his house, then his town and then his country, but God’s command is in inverse order:

From this we learn that the command has spiritual implications.

Lekh Lekha – ‘Go for yourself’ has the numerical value of 100.

This is a secret to the verse:

When you give the letters their value according to their position in the alphabet (Mispar Siduri), the word Yofi equals 37. 37 is also the value of the word: Hevel (vanity).

The word for ‘Vanity’ – ‘Hevel’, in Mispar Milui (the filling letters that form the concealed DNA of the word itself) equals: 486. This is two times the value of the name: ‘Avram’.

The Torah is Truth, as it’s written: “the beginning of your Word is Truth” (Ps. 119:160). Our sages teach: “The Torah one learns in this world will be Hevel (vanity) compared to the Torah of Messiah” (Kohelet Rabbah 11:8).

The purpose and goal of the Torah of truth is to bring the Messianic age; the Torah of Messiah. This is why Abraham occupies himself in bringing people under the wings of the Divine Presence, as it’s written: “And Avram took Sarai… and Lot… and the Soul[s] they had made in Haran and they set out for the land of Canaan” (Gn 12:5).

Abraham converted people and they joined him in his spiritual journey to Canaan; they shared the same fate and family, as the Midrash says: “Abraham converted the men and Sarah converted the women, and Scripture ascribes to them as if they had made them” (Bereshit Rabbah 39:14). The verb for “Convert” is ‘Geyer’ which means making someone to become a Ger – and what is a Ger? A Ger is someone who feels as a stranger in the Land he lives, as Abraham himself says: “I am a stranger and a sojourner with you” (Ger veToshav anokhi imakhem) (Gn 23:4), and it is also said: “Your seed will become stranger [ger] in a land that is not theirs” (Gn 15:13), in the secret of:
“And the stranger [ger] shall join himself with them, and they shall cleave to the house of Yakov” (Is 14:1).

On the exception of a tomb, Abraham died without receiving his promised inheritance; and this means that Abraham was a Stranger [ger] in this world because his inheritance is in the Holy Land of the Messianic Era, after the Resurrection of the Dead. And every one who attaches himself to Abraham also carries this hope with him.

This corresponds to the verse:

In the Hebrew, this is the only time in the Torah we will find this very rare verbal form for the verb: “to bless” (a nifal conjugation); in Hebrew it is more commonly used for the verb: habrikh, which has to do with grafting plants, and shares the exact same root – ברך – with the verb “to bless”.

“The Blessed Holy One said to Abraham: I have two goodly shoots [berikhot] to engraft on you: Ruth the Moabitess and Naamah the Amonitess” (Yevamot 63a).

Here Abraham is depicted as a Tree, and the nations that repent are considered shoots that are grafted in this tree.
This also conceals a secret in the Blessings we recite every day; for we always say:  “Barukh ata Adonai….” (Blessed art thou, O Lord… etc) – Barukh (Blessed) as if saying: ‘I am grafting your Holy Name in Me’ and ‘I am being grafted in you, HaShem’ (reason by which the Hassidic taught we have to Bless God 100 times (= Yofi) per day).
These two pagan nations; the Moabites and the Amonites descend from the incestuous relation of Lot with his daughters while he was drunk (Gn 19:37-38) – because [the midrash says] they thought the destruction of Sodom was the end of the world and they felt they had the duty to repopulate the earth.

Rabbi Eleazar mentions two shoots from these nations being grafted in Abraham:
Naamah the Amonitess, who married King Solomon, and became the mother of King Rehabaam (1Kng 14:21) and Ruth the Moabitess, who converted and joined the tribe of Judah, thus becoming the great-grandmother of King David, son of Yissai (cf. Ruth 4:13-17), from whom Messiah comes, as it’s written: “a twig will come up from the stump of Yissai, and a branch shall grow out of his roots” (Is 11:1).

So Messiah comes from the fulfilment of the Blessing:

The words: Khoter (twig) and Netzer (branch) make the acronym of KheN (grace, charm) – going back to Noah.

‘Khoter migeiza Yissai’ (a twig from the stump of Yissai) from left to right (the direction of judgment) forms the acronym of YiMaKh (cursed/erased). The first letters of: “Netzer Mishorashaiv Yifre” form the acronym: NuMI (my slumber), the same letters with: ‘Min’ (heretic) [all in the aspect of ‘Sheker haKhen’ – ‘charm is deceitful’ – ‘Noah is Sheker’].
The numerical value of Min (heretic) is 100 (= Yofi – beauty).

The value of the 6 words above is 2148, which is 6 times: Messiah (Mashiach) 358 x 6. And this means that the average value of each one of these 6 words refers to Messiah.

And now I’ll leave to you the choice to find out what the word ‘Netzer’ alludes to.

2 thoughts on “Parashat Lekh Lekha – The Blessing and the Plants”