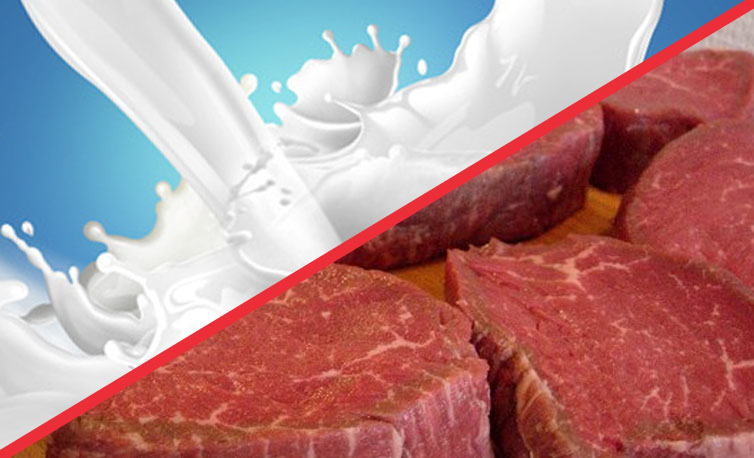 NOTE: This is a transcription (and translation) of a teaching given in Spanish some time ago. It was intended for Bnei Noah and gentiles who are interested in learning and observing Torah, but are far from being in the same level of Orthodox Jews. Like Rabbi Hillel would say, the most important part is to love God and to love your neighbor as yourself and the rest is the commentary, which with the time should be learnt as well. We don’t judge anyone because of their level of observance; that’s something between each person and God, but we usually intend to offer the most lenient approach for the beginners.

The Targum Onqelos – one of the most ancient and literal Aramaic translations of the Torah – renders this phrase as: ‘Do not consume meat with milk’. The Targum Neofiti 1 renders the phrase as: “Do not cook or eat meat with dairy together“. The Targum Pseudo Yonathan says (on Ex 23:19): “My people of the house of Israel, you are not permitted to condiment or to eat of flesh and milk mingled together, lest I be greatly displeased” and (on Deut 14:21): “It is not lawful for you to boil, much less to eat, flesh with milk when both are together“.

There’s a complete consistence in how the Targumim interpret this verse: it is a prohibition of mixing meat and dairy.

Even the Pshat expert Rashi (on Ex 23:19) interprets it this way, based on the Talmudic drash. The sages taught that the three times the verse appears in the Torah allude to three different prohibitions that are connected to each other and derived from one another (cf. Hullin 113b, 114a, 115b):

1) literally, prohibition of cooking meat and dairy together

2) by common sense, prohibition of eating meat and dairy together

3) Consequently, prohibition of deriving any benefit from it.

The prohibition is obligatory because it became Hallakha, as it is recorded in the Mishna (cf. Hullin 8, Gemara 103b-104a):

“Every kind of flesh is forbidden to be cooked in milk, excepting the flesh of fish and locusts“.

Then Gemara explains that some “flesh” are forbidden by the Torah and some by enactment of the Scribes. Which meat is enactment of the Scribes? That of wild (kosher) beasts and fowls. Rabbi Aqiva argues (Hullin 104a) that the Torah doesn’t forbid the meat of a wild beast (Khaya) or a fowl (Of). It is a fence in order not to violate the actual command (cf. Mishne Torah, forbidden foods 9:4).

The Hallakha establishes as well that one may not eat meat and dairy together, even if they were not cooked together.  Also that the two cannot be placed together on the same table where you are going to eat, except when it doesn’t depend on you.

So Gedi refers to any kid of any Behema (a grass eating domesticated animal, as opposed to a wild animal known as Khaya). A Gedi (of the cows, sheep or goats) must live 7 days nursed by his mother before being accepted as an offering (Lev 22:27).

Rashi interprets the three times this command appears in light of the  drash, basically accepting that the three times the verse appears, it means the same thing, but it teaches three different commandments. However there are other commentators who offer a contextual interpretation for each one of the three cases in which this verse appears. For instance, Yosef ben Yitzhaq Bekhor Shor notices that in Exodus the command is apparently out of context, not even fitting the first half of its own verse. He wrote on Exodus:

“the term bishul here means to grow or to complete, as it is similarly used in the verse: its clusters ripened [הבשילו] into grapes [Gen 40:10]. This is what the verse is saying: Do not allow [the kid] to grow up and be weaned from its mother’s milk; rather bring it at the beginning. This fits with the context of the first part which says, the choice first fruits of your soil [you shall bring; and just one verse before: do not bring the blood of my sacrifices with anything leavened]” (Bekhor Shor on Ex 23:19).

In Deuteronomy, however, the command appears in the list of forbidden foods (Deut 14:3-23), and here the Rabbi agrees with Rashi, the sages and the midrashic interpretation:

“It is forbidden to cook meat in milk… It is also forbidden to eat it or to derive any benefit from it. The inclusion of the term “its mother” comes to teach us the reason, for it would be cruelty to cook the flesh of a kid in the milk of the one who raised it [so every milk is forbidden] for perhaps the milk was that of its mother ” (Bekhor Shor on Deut 14:21)

This follows the rule of hermeneutics called Kelal uFerat (from general to particular). “its mother” is specific, but it serves as an example for the general. It’s like in the command: If you see your enemy’s donkey lying under its burden… you shall help along with him (Ex 23:5). Should we then help only with a donkey, or should we help also with a horse? Here the donkey serves as a particular example for the general.  So in our case, the verse forbids maternal milk in general.

Here we learn we have permission to cook meat with vegetable milk, such as soy-milk, almond-milk or coconut-milk. If you are suffering because you love Kebab and you are no longer to eat it with its delicious yogurt sauce, well, I have good news, you can make your own, it’s very simple to do, and you just have to substitute the normal yogurt with a soy-yogurt.

Just like Avraham gave dairy followed with meat (Gen 18:8) as long as one rinses his mouth and washes his hands, one is actually permitted to eat dairy first and meat immediately after. But not the other way around: According to the Rabbinical safeguard, one is required to “wait” certain amount of time between meat and dairy (Hullin 105a). Mar Ukva’s father waited an entire day between meat and dairy, but that is not hallakha. Mar Ukva waited only until the next meal. Rambam held the opinion that we need about 6 hours between meat and dairy because we might still have leftover meat in the teeth (hilkhot ma’akhalot asurot 9:28).

The Tosafot, just like Mar Ukva, hold the opinion that one is required only to wait for the next meal or to rinse the mouth between meat and dairy (Tosefta Hullin 105a), and this is actually the minimal Hallakhic requirement (The Rema, for example, said that one can actually eat dairy as soon as he finishes his birkat haMazon prayer for a meat meal, but that his community’s custom was to wait one hour). By the way, most modern communities take very seriously Rambam’s advice, and they rule that one must wait 6 full hours between meat and dairy (Sulkhan Arukh, Yoreh Deah 89:1).

Agra, the father-in-law of Rabbi Aqiva, said that one can eat fowl and dairy (separately) without restriction of time and without even washing the mouth or the hands (Hullin 104b), because, among other things, the fowl is a Rabbinic restriction and fowl don’t have maternal milk.

Meat represents the attribute of judgment (G’vurah), while milk represents the attribute of kindness (Hessed); and the two are never to be mixed together, so that holiness will not be rendered impure and judgment will not be aroused (cf. Zohar II, 125a, mishpatim). The Zohar continues saying: “He who consumes food – of meat and dairy – together, during the same hour or in the same meal [as specified either in hallakha or in the custom of the community], … a unity of impurity approaches him, causing unholy judgments to be aroused in the world”.