Tiferet is the fifth of the Sefirot and considered ‘central’ among them. It is often used to represent the group of six known as ‘Ze’ir Anpin’ (lesser countenance), which are; Chesed, Gevurah, Tiferet, Netach, Hod and Yesod. 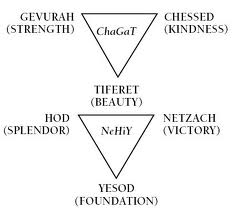 Above: The six Sefirot of Zeir Anpin

Terms that Tiferet is associated with include; Rahamim (compassion), the written Torah, Bridegroom, Husband, Son, King, Messiah, Ruler and Judge of the world,Tabernacle/Temple, the Tree of Life, the letter “vav,” Creator, Gate of Righteousness, Sun, “the Holy One blessed be He,” HASHEM, YHWH, YHWH-ELOHIM, the 42-letter name, the Lucid Mirror, Open Miracles, the lulov [on Succot], the color green, Tefillin of the Head, the angel Michael, ‘truth,” and is associated with Jacob.

Tiferet, along with Malkhut, are said to be the two principle Sefirot of the “lower seven” that deal with the world we live in. This is mainly because of the relationship Tiferet has to the bridegroom, Messiah and written Torah, and the association Malkhut has with the bride, Shekinah and oral Torah. The connection between bride and bridegroom implies a very intimate relationship between Tiferet and Malkhut, as depicted in the great wedding feast to come in the Millennial Sabbath.

Tiferet has a central relationship to all of the other Sefirot, and involvement with the unification of the Sefirot and the name of God. Because of this function, Tiferet (“Beauty”) relates to the idea of beauty in terms of “Harmony,” and is known by the name Ha-Kadosh Barukh Hu (The Holy One, Blessed be He), as well as the “combined name,” YHWH-ELOHIM.

Tiferet is seen as having a relationship with the physical direction of east, which kabbalistically is ‘toward G-d,’ as west is ‘toward the earth.’ East is the side of the Tabernacle that Moses and Aaron and His sons made their camp. The star that announced the birth of Yeshua in the gospels was in the east. It is also taught that the Messiah will come to Jerusalem through the eastern gate of the millennial temple.

Understanding of this relationship between Tiferet, which is associated with “Beauty,” and the direction of “east,” enables us to see a little deeper into passages such as the following:

Acts 3:2 – And a certain man lame from his mother’s womb was carried, whom they laid daily at the [east] gate of the temple which is called Beautiful [Tiferet] to ask alms of them that entered into the temple.

The Sefirah of Tiferet is associated with Jacob and “truth.”

The Matrix is the antithesis of truth and Jacob.

Morpheus: It is the world that has been pulled over your eyes to blind you from the truth.

“The path of the One” is bit of a mind field. The Matrix is about truth/reality being hidden in multiple ways – at times very subtly. This is the nature of the various levels of klippot – the “shells” that conceal the light of G-d in the world. You may leave an area of darkness and go into light, but this new reality has its own darkness.

Each one of the “problems” or “tests” that Neo, encounters, is a “nut to crack,” with the kernel of fruit within being the new truth that becomes exposed. This further enables him to learn more about the true nature of reality.

For example, at various times and in various ways, he does not recognize himself as “The One.”

Upon first meeting the Oracle he gets the “bad news”:

Oracle: Sorry, kid. You got the gift, but it looks like you’re waiting for something.
Neo: What?
Oracle: Your next life, maybe. Who knows? That’s the way these things go.

As the story progresses, it seems Neo begins to believe he is the “One” who will save Zion. Yet, much later in the story when nothing seems to be coming together for them, he firmly expresses his doubt to his mentor:

Neo: It was a lie, Morpheus. The prophecy was a lie. The One was never meant to end anything. It was all another system of control.

Upon hearing this from Neo, Morpheus (even with all of his ‘belief’) seems confused (as do the other characters). There is a whole new level of klippot to overcome for everyone. The process of removing these “shells” that hide the truth is called tsimtsum, which we cover in another section.

The Oracle’s insight into this phenomenon of tsimtsum, is:

“We can never see past the choices we don’t understand.”

Neo : Morpheus … he, he almost had me convinced.
Oracle : Poor Morpheus. Without him, we’re lost.
Neo : What do you mean, without him?
Oracle : Are you sure you want to hear this? Morpheus believes in you, Neo. And no one, not even you, not even me, can convince him otherwise. He believes it so blindly, that he’s going to sacrifice his life, to save yours.

It’s only later, in the third movie, that Neo confronts the Oracle on her peculiar “tactics.” This happens when he “knows himself.” (To “know” (da’at) is to “connect” to his true self, which is the essence of Teshuvah.) Only then does the Oracle say he is ready for the higher level of understanding that she (Binah/Understanding) presents to him.

Morpheus serves as ‘master’ to Neo on his journey from Malkhut to Tiferet (the ‘path of the One’), until the time comes for him to step out of the way of his student. This “path of the One” in the Matrix, is called “the path of the tzadik” in kabbalistic teachings. On the Tree of Life, it is mainly referring to the central path of ‘harmony’ between the left/judgmental and right/merciful aspects of the Image of G-d.

All three paths work together (see section on Netzach and Hod) in our efforts to ascend/conform to the B’tzelem Elohim (Image of G-d). The central ‘path of the tzadik’ is initially focused on the connection between Malkhut and Yesod, but continues upward to Tiferet and eventually to Keter.  This path is that of the ultimate “reality,” which is emeth/truth.

The Sefirot of Malkhut, Tiferet and Keter are aligned on the middle pillar with the following names associated with G-d:

Note when Neo is ‘stuck’ in the Merogingian’s ‘train station’ he has the vision of the ‘3 parallel paths’ that lead back to ‘the source.’ (You can see this between the 7 to 15 second marks from this movie trailer: http://www.youtube.com/watch?v=1PQ40oCLiqI.

It is interesting that Neo, like Joseph, is thrown into a hopeless prison, but it is here that he gains great insight into his path.

As mentioned, “truth” is associated with the Sefirah of Tiferet (“Beauty”) which is closely linked to the figure of Jacob. In addition to being the next ‘vertical step’ in the Path of the One/Tzadik, Tiferet also represents the concept of beauty in harmony between the extremes of total mercy and harsh judgment. This is a chief characteristic of Jacob.

In addition to balancing the “right and left” the Sefirah of Tiferet is seen as “central” to all the Sefirot and is seen as the representation of the “Supernal Groom.”

Zohar, Shemoth 136a -138b – Because of this current, we have a true Faith in this world, and all mankind can discourse of the mystery of the Faith of the Holy One in connection with these grades, as if they were revealed to and not hidden from them. Therefore it says: “And their words to the end of the world” (Ibid.), which means that from the beginning to the end of the world the “wise of heart” discourse of those hidden grades although they cannot be comprehended. And how far are they comprehended? “In them hath he set a tent for the sun” (Ibid.), because the holy sun [Tr. note: ‘Tiferet.] is as a tabernacle of all those supreme grades, and is as a light which has taken into itself all the hidden lights and the whole current of their extension, whereby Faith is manifested in the whole world. To grasp the Sun is equivalent to grasping all grades, because the sun is a “tent” including all and absorbing all; and he in turn lights up all the shining colours below. Hence “He is a bridegroom coming forth from his canopy (covering)” (v. 6), in the gleam and flash of those hidden lights which in strong yearning and desire give him tokens of their love, as to a bridegroom to whom all his friends give presents and gifts. And what is “his covering”? Eden, the “covering” which covers up all things. “He rejoiceth” from the side of the primeval light in which judgment has no place at all. “As a strong man” (gibbor) – from the side of “strength” (geburah); and note that it does not say here “a strong man”, but “as a strong man”, which means that Judgment is tempered by Mercy.

Neo’s jouney can thus be seen as attaining the level of Jacob/Tiferet/Truth. For this he will need to learn of and connect to all the emanations of the Tree of Life, even those of the “other side” (the “Sitra Achra”) commonly called, the “evil realm.”