Tsimtsum in its most general definition has to do with ‘restricting’ or ‘contracting’ in terms of reducing or eliminating something in order for something else to be understood, seen or created. A simple example of this would be when one goes to a quiet room to read. We eliminate the irrelevant background noise in order to focus and retain what is important. 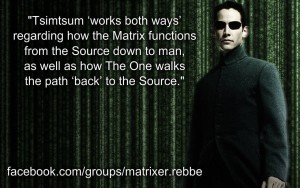 Tsimtsum ‘works both ways’ regarding how creation came about from G-d to man as well as how we seek to walk the path ‘back’ to the Image of G-d (B’tzelem Elohim) that we were created in.

For example: Tsimtsum is found in the opening verse of Genesis, which tells us that G-d created “something.” What was there before G-d created “something?” Only G-d of course.  (Called Ain Sof – “Without End.”) So for some-THING (i.e., creation) to exist, there had to be a reality that was not the ‘infiniteness’ of Ain Sof. G-d is not any-THING. The sages teach that G-d ‘restricted of G-d’ so that ‘something’ could ‘exist.’

We see this tsimtsum extend through creation, as within creation we have the idea of the heavens being at one ‘level’ with the angelic world ‘below’ this and then our own world. The idea of ‘below’ or ‘above’ with regard to these things as nothing to do with physical space of course.  Each level (or ‘world’) reflects more of a tsimtsum than the one before it. Thus, when we want to ‘connect back to G-d,’ we block out the ways of the world and focus on spiritual matters, we ‘make room’ for the latter.

For human beings, Tsimtsum is connected to the idea of teshuvah – most properly understood as ‘getting back to one’s true self,’ which is made in the Image of G-d. In the Matrix, Neo’s journey is back ‘to the source’ – interestingly called the Deus ex Machina – “G-d from the machine.”

Key to initiating the process of tsimtsum is where the Torah tells us that “G-d resists the proud” and that “Moshe was the most humble man ever.”  Indeed “humility” corresponds in Torah literature to what is called “the first gate,” which is the Sefirah of Malkhut (Kingdom).

It is always through this gate that the process of connecting to G-d begins:

Tsimtsum is a major theme in the Matrix, closely associated with the concept of “choice.”  This applies in terms of people coming to realize that they exist in this illusionary world, as well as their gaining greater insights into the truths beyond it.

Neo undergoes such a process many times – from learning of the existence of the Matrix, then how it functions and finally how to make use of it to bring ‘redemption’ to everyone else. Each of the people he interacts with contributes to this, although he may not realize it (or even fight against it!) at different times.

Neo’s connection to Trinity is the first and most critical relationship in the story. Trinity represents the Sefirah/emanation of Malkhut/Kingdom. It is because he “seeks first the Kingdom” (seeking what is beyond his world and connecting with Trinity after she “knocks” for him through his computer) that “all” (the truth of what is beyond the Matrix, etc.), is then “added to him.”

The lesson here is that action from below, often initiates the process of tsimstum from above.

The process of tsimtum does not always occur as we might expect however.  Neo’s first meeting with Trinity is in the setting of a “peculiar” nightclub – not a place he would have normally gone to, but he took the clue he had received (to ‘follow the white rabbit’) on faith, descending further into a very “dark” place within the Matrix world. We see several such places in the Matrix, where people “waste their lives away” with mundane pursuits. These are part of the klippot (“shells”) which are the barriers that further cover the truth of reality for those in the Matrix.

Sometimes tsimstum can come out of nowhere – like when you are waiting around for something:

Morpheus pushes the ‘restriction’ button continually with his pupil:

Morpheus: Have you ever had a dream, Neo, that you were so sure was real? What if you were unable to wake from that dream? How would you know the difference between the dream world and the real world?

Morpheus: What is real? How do you define ‘real’? If you’re talking about what you can feel, what you can smell, what you can taste and see, then ‘real’ is simply electrical signals interpreted by your brain.

Morpheus: How did I beat you?
Neo: You… you’re too fast.
Morpheus: Do you believe that my being stronger or faster has anything to do with my muscles in this place? Do you think that’s air you’re breathing now?

All of Morpheus’ interaction with Neo is to get him to first restrict what he perceives as ‘real’ in order to create an opening for an entirely new view of reality.

Neo is not the only one to experience tsimstum.  The other characters go through places where their perceptions are challenged.  Doubt can function as an instigator of this process.

Morpheus and Neo begin on the path of one together:

Neo: It doesn’t matter. I believed him.
Morpheus: That’s impossible, the prophecy tells us…
Neo: It was a lie, Morpheus. The prophecy was a lie. The One was never meant to end anything. It was all another system of control.
Morpheus: I don’t believe that.
Neo: But you said it yourself – how can the prophecy be true if the war isn’t over? I’m sorry. I know it isn’t easy to hear, but I swear to you it’s the truth.

Trinity has her own moment related to the same issue – it does not appear that Neo is the one within the circumstances of the moment:

Neo: Morpheus did what he did because he believes something I’m not.
Trinity: What?
Neo: I’m not the one, Trinity. The Oracle hit me with that too.
Trinity: No, you have to be.
Neo: I’m sorry, I’m not. I’m just another guy.
Trinity: No, Neo, that’s not true. It can’t be true.

Inevitably, things work out – which is why we read:

Habakkuk 2:4 – The just shall live by his faith.