The upper Sefirot of Binah, Chokmah and Keter, are called the “mochin” or “intellectual” Sefirot. As with all the Sefirot they exist in all the “worlds,” however each is also specifically associated with one of the upper worlds:

The relationship between the Oracle and Architect parallels that of the supernal Mother and Father concepts. These two, represented by the first two letters Yud and Hey in the 4-letter name of G-d (YHVH) are said to ‘never separate.’ Any semblance of disconnection is only from our limited perspective.

Further, as the Yud/Chokmah/Atzilut preceded the Hey/Binah/Beriah the former ‘includes’ the latter. Thus we address G-d as Abba (as it includes Binah) to reflect this and not present the idea of separation.

In the hierarchy of Matrix characters, the Architect is ‘closer to the source’ but not ‘separate’ from the Oracle. The two remain connected all the way through the final scene of the last movie.

As the Architect himself states:

“If I am the father of the Matrix, she would undoubtedly be its mother.”

In kabbalah, the emanation of Chokmah/Wisdom along with that of Binah/Understanding, form the past and future dimensions of time.

The Architect (Chokmah) largely frames his view of reality around the past, which results in his ‘fixed view’ of what must occur:

“ The first matrix I designed was quite naturally perfect. It was a work of art. Flawless. Sublime. A triumph only equaled by its monumental failure.”

“Your life is the sum of a remainder of an unbalanced equation inherent to the programming of the matrix. You are the eventuality of an anomaly, which despite my sincerest efforts I have been unable to eliminate from what is otherwise a harmony of mathematical precision. While it remains a burden assiduously avoided, it is not unexpected, and thus not beyond a measure of control.”

“Your five predecessors were, by design, based on a similar predication: a contingent affirmation that was meant to create a profound attachment to the rest of your species, facilitating the function of the One.”

“The function of the One is now to return to the source, allowing a temporary dissemination of the code you carry, reinserting the prime program”

Whereas the Oracle (Binah) has a different perspective:

The Oracle: I’m interested in one thing Neo … the future.

Although there is but one past, there are many possible futures. This is a key aspect of the Oracle being more of a guide than one that predicts things:

Neo: So is this the same Oracle who made the prophecy? … And she knows what? Everything?
Morpheus: She would say she knows enough.
Neo: And she’s never wrong?
Morpheus: Try not to think in terms of right or wrong. She is a guide, Neo. She can help you to find the path.

The attribute of Binah/Understanding is seen as the ‘connecting Sefirah’ between the ‘lower seven’ (called the ‘middot or ‘emotive Sefirot’) and the ‘upper three,’ (the ‘mochin’).

This is why, although we pray to’Abba,’ we recognize the connection to/through Imma, in the idea of, “Abba, which art in Heaven,” which is the world of Imma/Binah.

In the movie, the Oracle serves as the ‘connection’ between the matrix world and the world of programs and also beyond to the machine city.

From the text Sha’are Orah (Gates of Light):

This is the sphere called Binah. You must be aware that this is the Name that connects all the Spheres (Sefirot) with its powerful bonds of emanation and magnetism. For this is the third name of the three highest Names which which are united and are intimate with Keter (the highest Sphere). From this name the everflow of light, emanation and blessing, flows through all the channels until the lower seven Spheres are blessed from the three upper Spheres. (1)

The above reflects the absolutely critical role Binah has in connecting all things together.

As we’re told in the movie:

“I protect that which matters most.” – Seraph, speaking of the Oracle.

In Torah literature, the ‘spiritual realm’ is often seen as two worlds, the lower being that of angels/messengers (Yetzirah/formation) and the higher being that of the “Throne room of G-d” (Beriah/creation). The latter is also referred to as “Shamayim,” meaning “heavens.” The world of Beriah consists of higher spiritual entities called by such names as; “archangels,” “forces” or “powers.”

We see this separation mentioned in the New Testament:

Ephesians 6:2 – For we wrestle not against flesh and blood, but against principalities, against powers, against the rulers of the darkness of this world, against spiritual wickedness in heavenly places.

This is reflective of this midrash:

Midrash Rabbah, Genesis 10:6 – “Said Rabbi Simon: ‘Every single blade of grass has a corresponding ‘mazal’ in the sky which hits it and tells it to grow.”

The Matrix films do give us a glimpse of the “top down” view which includes the fifth world of Adam Kadmon. This can be seen at the very beginning of the second move, “The Matrix Reloaded.” Here is the link to a 90-second clip. Stop it at the 50-second mark.

We cannot see the actual vantage point of this view, beyond the ‘single point’ we are shown at the 50-second mark. (Note that the clip actually takes us “back” to this point, then forward from there.) This point corresponds to the idea of what comes before the letter “Beit” in the first word of the Torah. The Beit, which is not the first letter, is ‘open’ on one side, indicating something ‘exists before it.’ 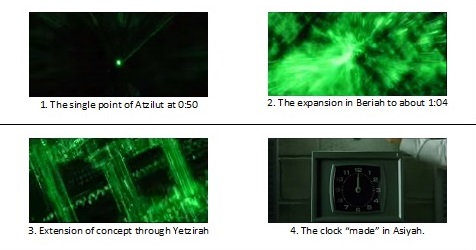 This single point emanates from the world of Atzilut, ‘nearness to G-d,’ or in this case, the world of the Architect, the “creator of the Matrix.” He represents that which is “closest” to the “fifth world” of Adam Kadmon which is associated with; the Machine City, mainframe and the Deus ex Machina (‘god from the machine’). The latter being the entity that Neo connects to at the very end of the last movie. This is the level of “Yehudi,” which is Yihud and union with G-d,” as discussed in an earlier study.

Later, we see that Neo is able to enter the world of Atzilut as shown by the same single point at the 20-second mark in this clip:

From the single point, there is an expansion which is all that emanates out of Atzilut. This corresponds to the world of Beriah/Creation. (Corresponding to the “Big Bang” in science.)

The code then enters the world of Yetzirah (“Formation”), where things (in this case what looks like a ‘blueprint’ for the time clock) are ‘formed.’  This enables the initial expansion to descend into the final world.

The process finalizes in the world of Asiyah (“Making”) where all is ‘made’ into the final form. This is the dissemination of the idea and function in the world of the Matrix.

At the end of the last movie, Neo goes beyond the Four Worlds of “Matrix existence,” and reaches the level of Adam Kadmon – the “Fifth World” of “pre-existence,” also called the B’tzelem Elohim, the “Image of G-d.” This is the “source” he had to return to, as the Oracle called it.

Note that the architect, though calling himself the ‘creator of the Matrix,’ remains a ‘program’ and though he is ‘beyond Creation’ (Beriah) he is part of the ‘existence’ which is ‘close to’ (Atzilut) but outside the ‘pre-existent mainframe,’ i.e., Adam Kadmon.

This 5th world is also referred to as “Golgotha” (the skull) in kabbalistic writings.  In the third Matrix movie this is represented by the giant image of a head formed by the machines whom Neo negotiates with to stop Agent Smith and save Zion.

Golgatha: The Deus Ex Machina – “god from the machine”

A comparison that can be made to Neo is the young man in the Torah named Bezalel.

Exodus 35:30-31 – “And Moses said unto the children of Israel, See, the LORD hath called by name Bezaleel the son of Uri, the son of Hur, of the tribe of Judah; And he hath filled him with the spirit of God, in wisdom, in understanding, and in knowledge, and in all manner of workmanship.”

Taking the five characteristics of Bezalel shown in the text in reverse order (as Neo developed them) with their associated worlds, the level of the soul that is affected, and the term connected with the level of man and his relationship with G-d, we can make these connections to the text of Exodus 35:30-31: