Ben Yosef and the Evil Inclination

In these days [2013], two Parashot that contain the mysteries of “Messiah ben Yosef” have not been so deeply studied, since the Hanukkah festivity took preference for most people I know, and somehow, Hanukkah conceals “Messiah ben Yosef” in the Parashot  Mikets and Vayigash (Gn 41 to 47).

Here there are many connections to be done.

Firstof all, as mentioned in previous notes, the apparition of “Messiah ben Yosef” hidden in the text.

The force of the Soul of a Righteous Messiah in the likeness of Yosef, who is rejected by his brothers, but becomes the paradigm of Righteousness and the bridge of Redemption. For it’s stated about Yosef: “he became the shepherd, the stone of Israel” (Gn 49:24), and then we read: “the stone which the builders rejected has become the chief cornerstone” (Psal 118:22) (cf. Zohar bamidbar).

The first letter of each word in this sentence gives the value 161, which is the value of “Yosef” the night before he came to Pharaoh – ie. Yehosef (cf. Kol haTor2:4).

From Yosef came Ephraim. From the line of Ephraim came Yehoshua son of Nun, whose mission was to defeat the evil forces of the pagan nations (Yehoshua son of Nun is a manifestation of this soul called Messiah ben Yosef). His first war was with Amalek, the archenemy of Israel (Ex 17:9); Amalek is son of Edom/Esav, owner of Mount Seir (mount of demon), the seed of the Snake/Samael = Satan.

Just like the seed of the Snake is in constant war with the seed of the woman, God is in constant war with Amalek, from generation to generation (Ex 17:16). Notice also that king Shaul lost God’s favor because he negotiated with Amalek (1S 15:8-9), and it was Amalek who finally killed him. Because like the evil Inclination, Amalek prevails when Moses stops praying (Ex 17:11). So the Mission of Messiah ben Yosef is to fight and defeat the Evil Inclination – even though he dies during his mission, as it’s written: “an evil animal devoured him” (Gn 37:33).

In the method called ‘Mispar Katan’ (in which the value of a word is reduced into 1 single digit) Mashiakh ben Yosef and Satan, both belong to the world of the number 8.

Messiah ben Yosef is in the aspect of “a fountain of Salvation”.

The Exile and Messiah

Yosef was exiled to the nations, and his exile brought the 1st exile to Israel; there, in the exile, he became a righteous leader; as it’s written: “He will judge among gentiles” (Psal 110:6).

The Name of “Ben Yosef” is hinted at the initial letters of the sentence: “He will judge among the gentiles” – “Yadin Bagoyim”; going from left to right (as the attribute of Judgment – Din – is from left to right).

Ben Yosef’s ability to bring gentiles to the knowledge of the One true God is because he is concealed among them; in the aspect of Yosef, who was considered dead by his own family, after being sold to the gentiles, and lived among them, and married one of them, and received a new name, and spoke a gentile tongue… as the sages say: “Yosef was swallowed up among the nations of the world” (Sotah 36b), similarly they taught that the reason Israel was exiled was in order to make Geirim (converts) among the nations.

The Hebrew name for Egypt is Mitzraim, which derives from the word that means to oppress, to constrain. Among the many metaphorical meanings we can deduce from this, one of them is understanding Egypt as a name for Israel’s exile, as our sages taught:  “All the pagan kingdoms of the world are referred to as Mitzraim (Egypt), because they metzirot (oppress) Israel.” (Bereshit Rabbah 16:4).

The words that God says to Yakov teach us that the Divine Presence is with us, whatever is the situation we face. “I will go down to Egypt with you”. In the likeness of: “In all their affliction, He is afflicted”(Is 63:9). “Wherever they were exiled, the Shekhina is with them” (Megilah 29a).

In Kabbalah, the Shekhina (Divine Presence or Divine Immanence) is a fememine attribute, linked to the feminine aspect of the people of Israel, depicted as the “Daughter of God” and the “Bride” of ‘Zeir Anpin’.  It always seeks to connect with the Creator, it always seeks to marry the groom (ie. Messianic figure). So in the words: “I will bring you up again” (Gn 46:3) God is telling Israel that the ultimate Redemption will come in the hands of Messiah. Yosef also said: ‘God will remember you and bring you up from this land to the land which He swore’ (Gn 50:24). Israel experienced 4 exiles. Of these, the first redeemer was Moses, the last redeemer will be in the likeness of Moses, this is, Messiah, of whom it is said: “HaShem will raise up… a Prophet like me, to him you must hear” (Dt18:15).

Most of this is already stated in previous notes, so I’ll move on to the next point.

The Pattern of Sevens

Second, the festivity of Hanukkah is a festivity of Lights, ending on the 8thday of the week, with the Menorah of 8 candles giving fully her Light.

You might notice, our time-bound material World is made of Sevens, being the 7th the axis of the other 6 that form a group. There are 7 continents, 7 seas, 7 rivers of Israel…In this pattern, God created the world in 6 days and rests in the 7th. There are 7 directions (ruchot) (cf. Yetzirah 4:4) and there are 7 emotive Sefirot (Prov 9:1), in the likeness of the 7 primary colours and the 7 musical notes. There are 7 days of the week, controlled by the 7 orbital planets that can be seen with the naked eye (haSheva Kokhavim Lekhet). As the World is patterned in Sevens, our sages state: “our World exists for 6000 years, and the 7th is a time of cessation, as it’s written: The Lord will be exalted on that day (Is 2:11; cf. Psalm 90)” (Sanh 97a). So it is taught that the 7th millennium of humanity corresponds to the kingdom of the King Messiah. This is seen in the fact that King David was the 7th son of Yisai (1Chr 2:15), and married Bath-Sheva (literally, the daughter of Seven).

But in Hanukkah we celebrate 8 days of Light.

What is this mysterious week of 8 days?

King David wrote the Psalm that praises Torah (Psalm 119) according to the letters of the Hebrew Alphabet, giving 8 verses for each letter (cf. Berakhot 4b). It is noteworthy the fact that circumcision is done exactly on the 8th day, making the boy enter into God’s covenant. Whether 7 represents the power (that rules) this world, 8 represents going beyond the mundane.  Interestingly, although David is the 7th son of Yisai, the Prophet Samuel tells us that he came to the prophet as an eighth (1S 16:10-11). There’s a great connection here as the Messiah breaks the barrier between spiritual and material world (the function of Yesod = Yosef). This is seen in Motzei Shabbat & Havdala, when Shabbat is ending and Sunday starts, and there’s this little period of time between Shabbat and Sunday in which both are totally mixed as one. The 8th millennium is a time of No-Time, endless, with neither years nor months, nor weeks, nor days (cf. Hanokh 33:1).

The miracle of the 8 days of Hanukkah alludes to the world that is being corrected and the Divinity that is being brought into it. Messiah is the most important piece. In fact, the Hanukkah festivity has Messiah hinted in it, just like Yosef was concealed from Israel during the time of his exile.

During Hanukkah we play the Dreidel, which outside of Israel contains the letters: 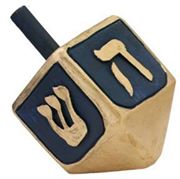 Acronym for “Nes Gadol Haia Sham” (a great miracle happened there). These (exile-form) letters in Gematria equal: “Messiah”. This is interesting because Messiah is to gather the exiles being “A Light to the nations” (Is 49:6). And also: “gentiles will come to your Light” (Is 60:3).

As mentioned above, one of the aspects of Messiah ben Yosef is to Sanctify God’s Name (Kidush HaShem; cf. Kol haTor 4:1), by bringing the pagan nations to the recognition of the Only True God. Therefore, when Yosef was brought to Pharaoh he Sanctified God’s Name by saying: ‘’except that God [in me] will give an answer of peace” (Gn 41:16), dispersing the thought that another deity but the God of the Hebrews will have any power on Egypt. So Messiah brings the nations to say: “we hear that God is with you”, in the likeness of “a great miracle happened there”.

Messiah is the secret behind the miracle, the reason that the Hanukkah Light lasted for 8 days. In fact the expression: “Lighting up eight days of Hanukkah” (MadlikimShmona YemeiHanukkah) in Hebrew gives us the Acronym of Messiah – “Mashiakh”.

So, if you find interesting that the Hanukkah festivity conceals partially the idea of Messiah ben Yosef and its Redemption from the parashot, and that the mystery of the Hanukkah Light is Messiah’s Light, you’d find also interesting the way Isaiah 53 leaves an empty space for the word “Light” in the verse:

“Of the travails of his soul he will see – – – he will be satisfied, by his knowledge my righteous servant will justify many, for he will bear their iniquities” (Is 53:11).

The Hebrew text leaves an empty space (just as I did in the translation). Interestingly, the word that should be in that empty space is “Ohr” – Light.

The word “Ohr” appears in the Qumran Hebrew manuscripts: “After the suffering of his soul he will see Light and be satisfied”. In the LXX, the Hebrew phrase is reworded and reinterpreted in a way that make us notice that the word “Light” is part of the original text, just like the words “Suffering” and “Knowledge”. There are even a few Masoretic manuscripts that contain the missing word. The Targum Isaiah interprets this verse in light of the verse: ‘the Torah is Light and reproof of instruction are the way of life’ (Prov 6:23). This makes clear that the Targum Isaiah also interpreted the Hebrew text as if it contained the word “Light” in it.

We believe in Divine Providence, so we believe that if the word “Ohr” appears in our text as concealed and  missing, there’s a reason for it. And the reason is the Light of Messiah. The ‘Concealed Light’.

In Kabbalah, the Gematria for “Yehi Ohr” is 232. 232 is the sum of the four aspects of the Sacred Name spelled out in all four levels (Hokhma, Binah, Hesed to Yesod, and Malkhut).

This concealed Light is the Light of Messiah, the Light of Redemption as it’s written: “the people that walked in darkness have seen a great Light, they that dwell in the land of the shadow of death, the Light shines upon them” (Is 9:1) [the Hebrew word Tzalmavet (shadow of death – צלמות) in Gematria equals: ‘Messiah ben Yosef’ – משיח בן יוסף = 566]. This is also the Light of Resurrection, as it is stated in Yov: “to bring back his soul from the pit, to be enlightened with the light of the Living” (Yov 33:30). And also: “in the Light of the King’s countenance is Light” (Prov 16:15).

This concealed Light tells us, not only that Messiah ben Yosef brings redemption, but also that he’s to raise up from the death, as it’s written: “As for me, I will behold your face in righteousness, I will be satisfied, when I awake with your likeness” (Psalm 17:15), as following our Isaiah verse (in Remez): “Of the suffering of his soul he will see [Light] and be satisfied” (Is 53:11), which is preceded by the verse: “they made his grave with the wicked”.

As stated in this Musaf: “Messiah our righteousness has turned from us… our sins and the yoke of our transgression he bore, bruised for our iniquities… Almighty God, hasten the day that he might come to us anew” (cf. Eliezer Hakkalir, Musaf Yom Kippur).