PART I – There’s No Empty Word

Of the 613 commands of the Torah, more than half have to do with the priests and the Sanctuary. If the Torah had only a “literal approach” – as Karaites say: “it’s clearly written in black and white” – we would have to agree that most of the Torah is not valid for our time since there’s no Temple anymore. Most of the Torah content would be empty words for us.

However, several times it’s written about the commands of the Torah (especially those commands that people in ignorance think to have passed away):

Even more specifically about the duty of the Levites it is stated:

So what happen here? Can we say that most of the Torah content are empty words and yet God want us to obey them while at the same time He knows we are physically incapable to obey them?

Rather, we deduce, inasmuch as God Himself (and not Moses) gave the Torah to Israel – which is stated in dozens of verses – and He expects us to obey it in every generation,  we have to assume that its content is (1) Heavenly, Divine and Spiritual and (2) deeper than what we can merely grasp with a fast literal reading.

This is the importance of the book of Leviticus. Keep in mind that in Hebrew the book of Leviticus is called “Vayikra” (and he called), because the whole book is a “call” to everyone to be a “nation of priests” and properly approach the God of Israel. The 613 commands of the Torah – of which more than half are about the Temple and the Levites – are condensed in three by the prophet Mikha:

“what God demands of you: only to do justice, to love kindness, and to walk humbly with your God” (Mic 6:8).

Isaiah came and condensed them into two:

“Guard justice and perform righteousness/charity” (Is 56:1).

And Habakkuk established the entire Torah on one axiom:

“Trust in HaShem and do good; dwell in the land and nurture your faith” (Psal 37:3)

The verb to “Nurture” (reeh) comes from the word neighbour (reakha) as in: ”Love your neighbour as yourself.” In other words: “In all areas of your life, make friendship with Faith and attach yourself to it, for it encompasses all the commands” (cf. Ramban).

Today’s portion is called Shmini (which means: eighth) after the verse:

This portion begins with the purification that Aaron had to perform on himself and on the people after the sin of the Golden Calf. Measure for measure, he was commanded to offer a Calf as a “Hatat” – sin offering (Lv 9:8). However, the reason behind the ritual purification is because the Divine Presence was going to be manifested that day, as it’s written:

“That day was as joyous to God as the day Heaven and Earth were created!” (Megilah 10b). God had said since the beginning that the purpose of taking them out of Egypt was: “That I shall dwell in their midst” (Ex 29:46). There’s great significance in the Torah referring to this sacred day as the”eighth day”.  In Gematria the word “so that I shall dwell” (leShakhni) equals the word “Tabernacle” (Mishkan), and both equal the name of our portion: Shmini – Eighth. And the word “Eighth” (Shmini) equals “Holy” (Kadosh).

As I said many times, our time-bound material World is made of Sevens and the seven represents the axis or wholeness of the other 6 elements that form a group (see my commentary on Parashat Vayigash). Days and millenniums are the same thing from God’s perspective, as stated in the verse: “one thousand years before your eyes are like the yesterday day that passed” (Psal 90:4). This is also seen in the fact that the letter Alef stands for two numbers: The number 1 and the number 1000.

Since weeks have 7 days, the eighth day represents something “beyond the mundane”, something that “transcends the normative order”, and alludes to the eighth millennium of humanity; “a time of No-Time, endless, with neither years nor months, nor weeks, nor days” (cf. Hanokh 33:1).

The eighth goes beyond our natural world. Whether the mystical 8th day exists, we only operate under our natural pattern of sevens. So we find that during seven days, Israel prepared the way (operating in the obedience of the Torah) so that the Divine Presence will come to dwell in the Sanctuary; and she came on the 8th day. – The secret of performing circumcision on the 8th day. 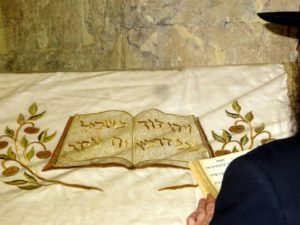 King David is a paradigm of the number eighth coming to dwell within the seventh. He’s the 7th son of Yishai and he married Bath-Sheva (lit. the daughter of seven). However, he is counted as an eighth son (1 Sam16:10-11).

Also in our nature there are 7 standard musical notes, and the Harp in the Temple had seven cords – as it’s written: ‘in your presence there’s Sheba [ie. seven] of joy’ (Psal 16:11) – but during David’s reign the harps were established on ‘Sheminit’ – ie. the eighth (1Chr 15:21).

And about Messianic era David wrote: “la’mNatzeakh al haSheminit”; which can be translated as:

And after: “LeDavid” (ie. for David); which alludes to Messiah as it’s written:

“afterward shall the children of Israel return, and seek HaShem their God, and David their king” (Hos 3:5).

Messiah brings an eighth cord to our Sanctuary. Messiah breaks the barrier between the natural and the spiritual (in Kabbalah, this is the function of Yesod). Messiah makes us notice that the Light of Shabbat comes from an even higher realm which is called the “Eighth day”. The Gemara notices that since Shabbat is on Saturday, the eighth day is a Sunday, which corresponds to the first day of Creation (cf. Shabbat 87b).

In the days of Messiah we will experience the Light of the Eighth day; which is the World to Come, while we will still yet in the Seventh day (the Sabbatical millennium of Messiah). So the phrase: “And it happened in the eighth day” (Vayehi BaYom haShmini) equals the expression: “in his Kingdom” (baMalkhuto). And the sentence: “Yom haShmini” (the Eighth day) equals: “Fullness” or “Completeness” (Milut).

Yehoshua ben Levi related he once met the Messiah and asked: “When will you come?” Messiah answered: “Today”. But that day he didn’t come. Disillusioned, he went to the prophet Eliyah and told him about Messiah’s answer. Then, Eliyahu the Prophet told him that Messiah was quoting a verse from the Bible:

In the same manner we are told in this week’s portion: “Today HaShem will appear to you” (Lv 9:4). That is: Today, if you make the purification I’m commanding you to do. Today, if you hear His voice. This is the secret of the eighth day.

We all want Messiah to come (may it be speedily in our days) but sadly many cross their arms while waiting for the world to be totally devastated so that God will send Messiah to save what is left of it (that is, Midat haDin – the attribute of Justice).

They don’t realize that judgment comes upon those who know how to do good, but do nothing. It is our duty and our job to correct the world so that God will have a home to live and Messiah will come as a crown on His children.

Repentance is so important that the end of this week’s parasha hints to this. 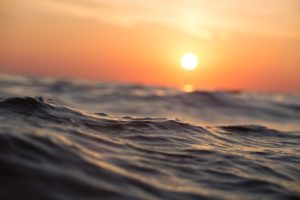 In general a Jew must remain in a status of purity, consecrated to God, but in case he was contaminated by this non-consecrated material world, he needs to immerse himself in a body of water.

Water purifies because it symbolizes Divine pleasure. There are three words used in this verse:

Someone unclean immerses in the water and is filled by the inherent aspect of “pleasure” within, and is cleansed from the dirtiness of this mundane world (this is one of the reasons the ‘baptism’ or immersion must cover “all the body” and not only a “part” of it).

‘Surely, a spring or a cistern, a Mikveh of water he will be clean’. The seven words that compose this phrase equal the word: “Tmimut” – ‘Innocence’.

When you are purified with the water of the Mikveh, you reach a level of ‘Innocence’ like that of a baby, as it’s written: ‘he dipped himself seven times in the Yarden… and his flesh came back like the flesh of a little child, and he was clean’ (2Ki 5:14).

When a Jew purifies himself through immersing in a Mikveh, he’s doing so for the “fear of HaShem”, because he doesn’t want to remain unclean. Immersion is precisely one of the requirements for “Repentance” (Tshuva).

May we all live pure and create a proper home for the Divine Presence.

One thought on “Parashat Shmini – Welcome the Shekhina”