13 Petals > Parashat Shlakh – In the Desert and In Redemption 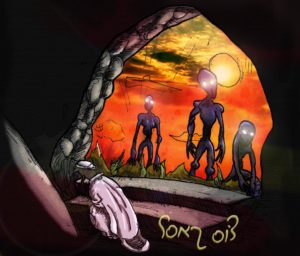 Today I’m gonna use a more Breslovic approach to this week’s Parasha.

After God allowed Israel to send 12 spies to Canaan (cf. Dt 1:22), 10 of these spies gave a bad report and all Israel feared to enter Canaan, and all of them wept that night.

Since the Exodus of Egypt, Israel was living in a supernatural spiritual dimension. Ten plagues destroyed Pharaoh, the sea was split for them to pass, a Column of Fire protected them from scorpions and the cold of the night – a column that turned into Cloud during daylight to protect them from the heat of the desert, their clothes were not aging, they saw the voices of the Mighty God and trembled at mount Sinai, they saw how heavenly fire devoured the daily sacrifices, bread from the Sky fell every single day but Shabbat to feed them, they were drinking water from Miriam’s well – a rock that followed them… (cf. Shir haShirim Rabbah 2:16). They just had to ask for it, and they got it; whatever it was. That’s how Israel was living in the desert.  Now Canaan was at hand, and these spies (who were not common people, but chiefs over their tribes) realized that the way they lived and the way they observed Torah was going to change.

Here there are enormous fruits, so we will not have manna anymore; all the laws we didn’t need to observe such as the cities of refuge, will have to be obeyed literally. We will have to work to get whatever we want in the realm of materiality. If the supernatural sustain in which we live is going to end, and we have to face a natural world like the common people, then we will have to conquer the Land under the natural rules of the world, and let’s be honest, “they [the enemies] are stronger than us” (Nm 13:31).   “It’s a land that consumes its inhabitants” (Nm 13:32); it’s tired living there, and we don’t have time for spirituality (cf. Schneur Zalman).

We have seen the Nefilim there (Nm 13:33) – the fallen angels; sons of Anak; these are descendants of Shemhazai and Azael, who were corrupted when descended to the Earth in the days of Noah (cf. Rashi; Yalkut Shimoni Bereshit 44; Zohar 1:19b).

The word ‘Anak’, as it’s written in the Torah (haAnak) is not a person but a status/species/race (Anakite – if you want to remember this name: think of Annunaki). In Gematria ‘haAnak’ equals “haNefilim” (the fallen ones).

If the material life of this world corrupted these powerful angels, how much so will happen to us? – they thought.

Previously, God had told them to ‘build a Sanctuary so that he will live among them/within them all’. God’s purpose was to make of this material world a spiritual habitation for his Glory. But these 10 spies thought that it had to be one way or another, with their own effort or with God’s supernatural sustain. Only Yehoshua (aka. Joshua) and Kalev realized that both things work together in God’s ideal plan; unlike the fallen angels, we have the power to turn the world Divine, and turn the natural into supernatural – we are made of the two natures. As Yehoshua said: “the Lord is with us, there’s nothing to fear about them” (Nm 14:9).

The Gematria of the three giants: Ahiram, Sheshai veTalmai equals the verse:

“For God is the King of all the Earth; sing praises with intelligence” (Psal 47:8 [7]). That’s interesting because this Psalm as a whole speaks of how God subdues Canaan under Israel’s feet.

A DRASH ON THE STORY

How many of you feel the same in the daily struggles of this life? In our personal Exodus we feel like Spirituality is everything. You know what I’m talking about if you have ever experienced a season in your life in which God’s grace was all you had. When I was a kid my family was tremendously poor; for the most part I lived alone with my mom. Not exaggerating at all, my mom had to contend with rats who wanted to bite my ears while sleeping. We didn’t have electricity at home; it was a continuous Shabbat – and later when we had, there was nothing to brag about. We got most of our basic food from the Catholic food bank. That was our particular “desert”. Nevertheless, in that ‘desert’ the grace of HaShem was very notorious. If there was some scary noise during the night I just had to ask God to stop it, and it did. I had lunch alone in the kitchen and a peaceful invisible hand stroked my hair. My mom needed a washing machine and in a few minutes after praying the neighbour gave her one. And things like that were our daily bread.

But there was the time of change; of maturity. The time in which my mom would prosper economically enough to start again a new life, in which miracles ceased and if she wanted something, she had to work for it because it was in her hand to achieve it. That’s the conquering of Canaan. Stop living in a Spiritual limbo in which Prayer, Spirituality, and Biblical Study will not be the only thing to do; a time in which we have to face the real world – a world that consumes its inhabitants – and put into practice everything we have learned, and this time, without manna raining from the Sky. It’s in this time we can act as the 10 spies and say: That’s not possible, to face the world, especially knowing that this world is occupied by Fallen Angels and all human beings behave in corruption, they are more, they are dangerous, bigger, and own the system (Ahiman, Sheshai & Talmai; cf. Sotah 34b), what can we do there? – Doubt which is brought by Amalek.

But we can choose the side of Yehoshua and Kalev and realize that everything we have lived and everything we will live has a purpose, God is still among us, and we will eat up fallen angels if they dare to claim what belongs to us. Maybe the sea won’t split for us, but we can dry a river to pass through. Maybe bread won’t fall from the sky, but through faith we can make days longer to achieve our goals.  That’s why Kalev went alone to Pray in the merits of our Fathers before the journey. That’s why Hoshea was given an extra “Yod” in his name, thus becoming Yehoshua.

They could have brought the Kingdom of Heaven in one day, they could have built a House for the Creator here on earth – the entire journey was and has been only about this. By combining the Natural with the Supernatural, by acting in the physical through Faith in the Spiritual, the land of Canaan would have become a Heavenly Temple, a Great Mountain serving as an example and a witness for the entire world; the great Light of the World we mentioned last week.

But instead, the lack of Faith delayed the Final Redemption. Instead, the enemies of Israel would be fought generation after generation starting with Yehoshua (Joshua – Messiah ben Yosef) and ending with David (Messiah ben David).

Instead, the Holy Temple was fabricated twice and destroyed twice.

-On that day of Tisha b’Av – (the 9th of Av) Israel wept because they didn’t have Faith in God. It was thus Heavenly decreed that in future generations that day would be a day of mourning (cf. Taanit 29b). In Tisha b’Av it was decreed that such generation will not enter Canaan. Tisha b’Av is the day the two Temples were destroyed. The Romans brought to an end the rebellion of Bar Koziba the 9th of Av by conquering Betar (cf. Taanit 26b).  In a more recent historical account, on the 9th of Av the Jews were expelled from England (1290) and also from Spain (1496). But where there’s a reminder of fail, there’s also Hope in the redemption.

Because of that fateful day, a new generation of Bnei Israel started to be gestated in the womb of Creation for 40 years. A year for a day. 40 is the span of time necessary for the ripening process that leads to fruition. It’s the time an embryo needs to mature perfectly inside the womb (cf. Bekhorot 21b). Our sages teach that: At forty years, one attains insights (Avot 5:21) – literally: ‘Ben Arbaim leBinah’ – and Binah is the mother.

40 years have passed; the new generation of Israelites is ready to go and conquer; even if the miracles cease, even if Canaan must be taken by force. An unexpected ally enables the spies to enter and leave Yericho in peace; a gentile who is seen as the scum of the society; an innkeeper brought to prostitution due to her family’s poverty, and yet, a righteous and decent woman who loves Israel (cf. Meam Loez al Yehoshua). While Israel is wandering, she’s experiencing her own particular “desert” in life; our sages allude to this by saying that when Israel wandered 40 years in the desert, Rahav was engaged in prostitution 40 years. Their freedom from the desert came at the same time.

The sign of the Redemption was a ‘cord of Scarlet thread’ – which in the past she used for her harlotry but now in her Correction is used to help Israel; in Hebrew is called “Tikvat Hut Shani”.

The meaning of the Cord of Scarlet thread is: “the Hope of a thread of Change”. What a fabulous sign!!

Why the two spies entered a house instead of being more discreet, thus causing the city to be alarmed of their presence? It was for the sole purpose to save Rahav, and give a last chance of repentance.

Now as the final redemption is at hand, and we all smell the need for a time of Change, hundreds and millions of gentiles start to be aware that the Bible they respect is a Jewish book; that the Torah of Israel is the source of all their ethical values… that the God of Israel is not a man-made piece of stone decorated with gold… now there’s a time for repentance into the nations before the coming of Messiah – an era in which Spirituality will conquer and destroy the influence of the fallen angels; in which Heart will overcome the love for material luxuries and other vanities that will pass. You can be like Rahav and make repentance, or be like the leaders of Yericho and try to kill the Jews. Either case, Israel wins at the end.