Week 4:  Characters from Winnie the Pooh 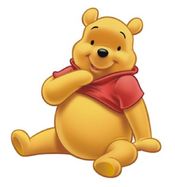 Pooh is the central figure whose life is in harmony when the other characters are in balance. Pooh, like the Sefirah of Tiferet, often stands as the representative of the entire group.

Whereas Jacob was a master of focusing on priorities, Pooh exemplifies the habit of “First things First” to a fault, with his obsession with honey. This is shown clearly in the link below.

There are a number of Tiferet-related themes in the video if you look closely: