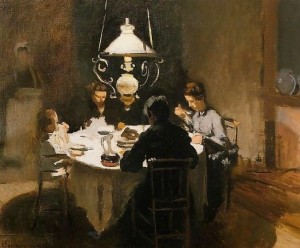 Before and after enjoying any food we are expected to bless God in gratitude for it. The Torah commands to recite a GRACE after meals (Deut 8:10). The command is obligatory (Despite the fact that this is the most commonly forgotten blessing, especially by those who don’t live in an Orthodox community).

How about the GRACE BEFORE MEALS? It is a Rabbinic ordinance. Our sages taught:

“It is forbidden to taste anything without saying a blessing over it” (Berakhot 35a).

By doing so, we acknowledge God as the source of all sustenance, and recognize that the earth and its bounties belong to him. Otherwise it would be similar to stealing food from the table of a king.

In addition, Kabbalah and Hassidut teach that all food – as everything else in the world – contains a ‘spark’ of holiness exiled in the material/secular realm, waiting to be redeemed. When we say a blessing before eating, and turn our meal into a Divine service, we elevate the physical substance of the food into holiness and reunite it with its Divine source.

When the human body hungers for a piece of physical bread, this is but a reflection of its soul’s craving for the “soul” of the bread (i.e. the spark of holiness), which the human being redeems by utilizing the energy he or she derives from the food towards a Godly purpose. This is a mystical secret concealed in the verse (Deut 8:3): “A man does not only live by bread, but also by the utterance of God’s mouth he lives” (cf. Tanya chapter 7).

Hassidic or not, the grace before meals is part of our Hallakha, and we are bound to do it. So the question is: how?

First things first. Virtually every blessing (Brakhah) begins with the same formula. You just need to learn the formula and you’ll know the first part of nearly every single blessing:

What follows after depends on what are you going to eat.

Note: Remember to answer Amen immediately after hearing a blessing being concluded by another person (Not after your own blessing; cf. Berakhot 45b).

If you want to play it safe, eat always with bread (wheat, barley, rye, spelt or oat bread). The after-meal grace will be longer, but It will simplify everything else.

Every meal that is accompanied with bread requires a blessing over bread, and it will cover everything you eat (except for dessert and wine), This is based on the fact that the word “bread” is often another way of saying “meal”.

Before meals accompanied with bread we are expected to perform a ritual hand-washing (Netilat Yadaim). Since it is a Mitzvah d’Rabanan it is recited as a ‘commandment’ blessing.

When performing a commandment the formula starts with:

In the case of hand-washing we simply say “hand-washing” in Hebrew – Netilat Yadaim.

So the blessing is:

When eating with bread, you break the bread, make a blessing over it, then eat a portion, and then share with the other members (cf. Berakhot 47a). For the blessing over bread – which is called haMotzi (who brings forth) you say:

As stated above, desserts and wine have their own blessing. When eating food outside of a bread-based meal, individual food types receive their own blessing before and after eating. We say that God is the one who creates them (i.e. the Boreh). They can be catalogued as follows:

1 – grain based food that is not bread (such as cakes, pasta, crackers, pastries, cereals, and other grain products). It is called Mezonot.

4 – the fruit from the tree (such as apples, most nuts, peaches, oranges, figs… etc). The fruit of the tree is called: Pri ha’Etz.

5 – the food that does not fall into the previous categories (this includes animal derived products [such as meat or eggs], liquids that are not wine [including water], mushrooms, candy.. etc). For this kind of food we say that all of them came to be by God’s word [bi’Dvaro].

So this is the formula you have to remember (cf. Mishna Berakhot 6:1):

◌ What is the blessing for unclean food (i.e. food that is not permitted in the Torah)?

◌ Is a blessing on water always needed?

◌ What if I have on my dish two items of two different kinds? [eating without bread]

◌ What’s the blessing for a salad with a mixture of ingredients?

◌ What’s the blessing for quinoa?

◌ What’s the blessing for lemons?

◌ What’s the blessing for medicine?

◌ What is the blessing for Rice? [Pay attention Asian communities]